Honeysuckle to go for Mares' Hurdle rather than Champion 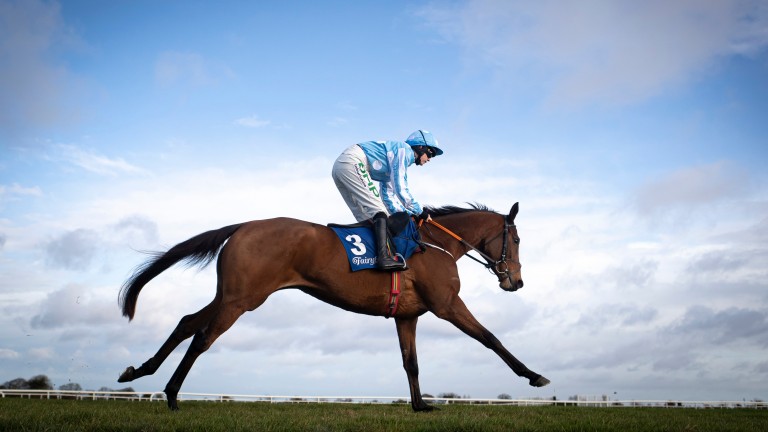 Honeysuckle: will run in the Close Brothers Hurdle next week
Patrick McCann
1 of 1
By Richard Forristal UPDATED 5:50PM, MAR 3 2020

Honeysuckle will bid for Cheltenham Festival glory in the Close Brothers Mares' Hurdle rather than the Unibet Champion Hurdle next week after connections decided the longer trip would suit her best.

The Henry de Bromhead-trained six-year-old, owned by GVC Holdings chief executive Kenny Alexander, is unbeaten in seven starts under rules, most recently defeating Darver Star by half a length over two miles in the PCI Irish Champion Hurdle at Leopardstown last month.

She is a best priced 15-8 second favourite for the two-and-a-half-mile Close Brothers with Benie Des Dieux, also entered in the Paddy Power Stayers' Hurdle, heading the betting at a general 8-11.

After much deliberation & discussion with @HenrydeBromhead & Kenny Alexander, Honeysuckle will go for The Close Brothers Hurdle @CheltenhamRaces next Tuesday & not The Champion pic.twitter.com/zA11fDmjjB

Prior to her triumph at Leopardstown, Honeysuckle had won three on the spin over the intermediate trip, including a resounding nine-length triumph in the Baroneracing.com Hatton's Grace Hurdle at Fairyhouse.

Of the decision, De Bromhead, who feels his travelling delegation will be as strong as he has ever taken to Cheltenham, said: "Honeysuckle was so impressive over two and a half miles and it's the mares' championship race. We think that's the race to be in.

"We gave it a lot of thought and discussed it, and that's what we've all decided. I'd imagine we'll confirm her for the Champion at the five-day stage because we've come this far and we may as well leave her in and keep the option open, but we've called it now and the mares' race is the plan.

"There are various things to take into account, but mainly it's that her most impressive performances have been over two and a half miles. That's the trip she's got her highest rating at. She still won an Irish Champion Hurdle but we just feel that it's the mares' championship race so that's the race to go for."

It will be a first visit to Cheltenham for Honeysuckle, who on her penultimate start breezed to a nine-length success in the Baroneracing.com-sponsored Hatton's Grace Hurdle at Fairyhouse in December.

The Close Brothers Mares' Hurdle has been dominated by Willie Mullins since its inauguration in 2008 with the Closutton trainer winning nine of the 12 runnings, including six consecutive victories with wonder mare Quevega.

Despite potentially taking on another Mullins hotpot in Benie Des Dieux, Alexander believes the Mares' Hurdle provides him with the best chance of gaining a treasured first Cheltenham Festival success.

"She's off to the Mares' Hurdle. I've never won at the festival and I might never have as good a chance, plus we think she is better over the [longer] trip," he said.

Honeysuckle, a three-time top-level winner over hurdles, was a general 9-2 chance for the Champion Hurdle.

She will be among a team of "between 15 and 20" to represent De Bromhead, whose festival tally stands at seven following last year's wins for A Plus Tard and Minella Indo, who are leading contenders for the Ryanair Chase and RSA Novice Chase respectively.

Notebook, a clear 5-2 favourite for the Racing Post Arkle Trophy, is another with significant claims for the County Waterford trainer.

"Looking at the betting, it's probably as strong a team as we have had," said De Bromhead, who reiterated that only very heavy ground would prompt connections to consider switching A Plus Tard to the Queen Mother Champion Chase.

"We have had similar numbers travelling before but they wouldn't have been as prominent in the betting. Whether that will reflect in the results is another thing altogether, but we have plenty that hopefully have good chances."

FIRST PUBLISHED 11:37AM, MAR 3 2020
There are various things to take into account, but mainly it's that her most impressive performances have been over two and a half miles