Flawless display sees We Have A Dream spark Champion hopes 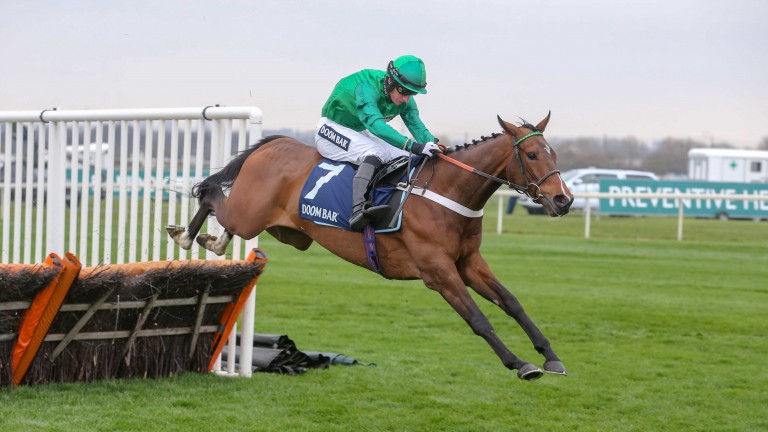 We Have A Dream produces a superb leap at the final hurdle to secure an emphatic victory
GROSSICK RACING PHOTOGRAPHY
1 of 1
By Jack Haynes UPDATED 6:12PM, APR 12 2018

We Have A Dream maintained his unbeaten record in Britain with his most impressive victory yet in this Grade 1 contest and sparked hopes of a tilt at the Unibet Champion Hurdle next season.

The son of Martaline, five from five this campaign, cruised through the £100,000 race, storming clear in the home straight to defeat Gumball by seven lengths, with stablemate Apple’s Shakira a further ten lengths back in third.

Paddy Power introduced We Have A Dream into their Champion Hurdle market at 25-1, while Betway took a more conservative view in offering 16-1, with connections confirming that will likely be the plan for next season.

Nicky Henderson, who won this juvenile event with subsequent Champion Hurdle winner Binocular in 2008, said: “We can dream about the Champion Hurdle – we’ve got all summer to think about it!

“He’s a good horse – that was a good performance – but having said that none of the first three from the Triumph Hurdle have turned up here.

“You could make anything of the race, but he won it well. He’s got his life in front of him and he’s never stopped improving all season. He loves tearing along and his jumping was very slick.”

We Have A Dream: could prove a Champion Hurdle contender
Martin Lynch
A temperature on the final day before the Cheltenham Festival ruled We Have A Dream out of the JCB Triumph Hurdle, although Anthony Bromley, racing manager to owners Simon Munir and Isaac Souede, felt that may have proved a blessing in disguise in aiding his Aintree demolition job.

Bromley, who added Arkle winner Footpad will head to Punchestown if scoping clean in the next week, said: “It may well have ended up proving an asset missing Cheltenham in the end as that was an impressive performance.

“We’ve always liked him – he’s a slick jumper and although he will jump fences, I see no need to rush him into novice chases next season.

“We’ll test the waters in some of the Champion Hurdle trials and see where we are.”

Philip Hobbs' Gumball produced a career-best performance to take the runner-up spot, while Henderson felt Apple's Shakira's fourth-placed finish in the Triumph Hurdle may have taken its toll.

Henderson said: "She settled better today, got there two out, but couldn’t quite land a blow on We Have A Dream.

How strong are We Have A Dream's Champion Hurdle credentials?

History suggests its incredibly difficult for juveniles to make an impact the following season in the Champion Hurdle and if anything We Have A Dream has come along a season too late.

Stablemate Buveur D'Air looks the real deal and will be just eight when bidding for a third Champion Hurdle, while the dearth of rivals Buveur D'Air faced this season is unlikely next season thanks to the emergence of the likes of Samcro, Laurina, Summerville Boy and Mengli Khan.

Throw in the Triumph Hurdle one-two Farclas and Mr Adjudicator, who shone in a vastly deeper race, and Alan King's well-regarded Redicean and it is unlikely Nicky Henderson will be able to plot an soft route to the race.

We Have A Dream could struggle to make it through the trials in a manner that makes him anything other than a bit-part player and, given that, the 25-1 currently available is distinctly unappealing as he is more likely to be bigger on the day - if he even makes it to the race.

FIRST PUBLISHED 2:35PM, APR 12 2018
He’s got his life in front of him and he’s never stopped improving all season