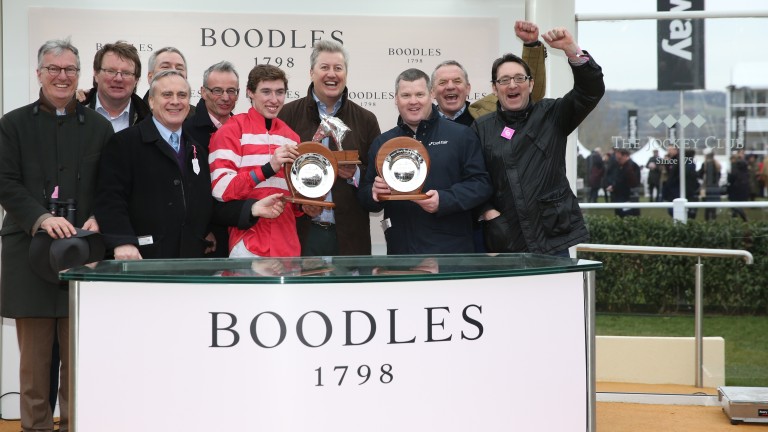 Connections of the Boodles Fred Winter Juvenile Handicap Hurdle winner pick up their prizes at Cheltenham on Wednesday
GROSSICK RACING
1 of 1
By Bruce Jackson UPDATED 11:10AM, MAR 18 2018

Fred Winter, one of the giants of the jumping game, is being demoted from the race that has carried his name since 2005 at the Cheltenham Festival.

The champion jockey and trainer, who died 14 years ago, is the latest casualty of commercial considerations.

The juvenile handicap hurdle bearing his name was sponsored for the first time this year by Boodles, who have previously backed the jockeys' title at the meeting.

Next year the race, won by Veneer Of Charm on Wednesday, will be known as the Boodles Juvenile Handicap Hurdle with the brackets (formerly the Fred Winter).

Explaining the change Ian Renton, regional director of Jockey Club racecourses south west, said: "Fred Winter will still be the second title but with Boodles sponsoring it for the first time they didn't get a single mention on the day, which is why we have to go the whole hog for Boodles, who are sponsoring the race in a longer-term deal."

Many racing legends, equine and human, have suffered a similar fate at Cheltenham including famous amateur rider Anthony Mildmay, Baron of Flete, who had the Mildmay of Flete run in his memory at the meeting before sponsors also relegated him to a footnote.

Each year the race titles form quiz questions such has been the carousel of names but it has not stopped racegoers packing the course to the rafters. 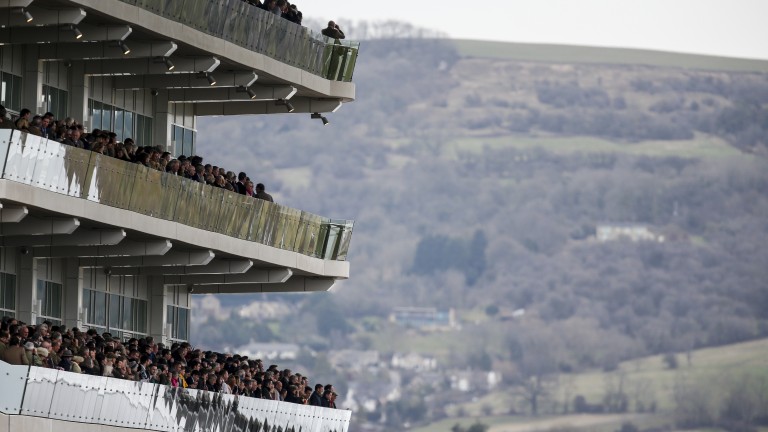 Cheltenham has no plans to raise the safety limit with extra facilities, with Renton reasoning: "There were great comments yesterday about still being relatively easy to move around with everyone pushed to the max.

Considering the crowds Renton was able to report just a handful of drunk and disorderly and theft arrests by police with "incidents dealt with efficiently by the police".

The small fields for the Grade 1 Racing Post Arkle, Triumph, Ryanair and JLT drew comment but Renton insisted it was not a concern within the context of the results and healthy numbers for other races.

Renton said: "It is not a major problem as occasionally there are small fields. Importantly the best horses run and it is offset by particularly large fields in other races. This year the Gold Cup had a bigger field [15 ran after 18 declared]."

Renton paid tribute to the army of staff who were tested to the full by the weather in the run-up and through the four days as heavy entered the going description at the festival for the first time since 1989.

He said: "It was a fantastic festival despite the soft and heavy ground, with brilliant performances and great finishes.

"It was a huge effort from Simon Claisse and the groundstaff team dealing with snow a couple of weeks before and the operational team who had to deal with the challenges of the car parks, laying miles of track and building a road to keep them open when others were closed. They could have done no more, although we are not pretending everything was perfect."

FIRST PUBLISHED 5:37PM, MAR 17 2018
With Boodles sponsoring it for the first time they didn't get a single mention on the day which is why we have to go the whole hog for Boodles