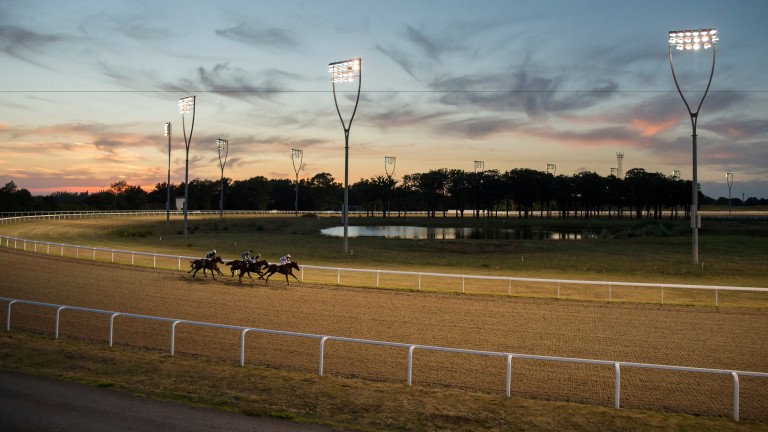 A flurry of snow in the hour before racing was scheduled to begin condemned Chelmsford
Edward Whitaker
1 of 1
By Keith Melrose 9:47AM, JAN 13 2017

It is rare that an all-weather meeting falls victim to the weather while the turf meetings survive, but the band of cold weather due to hit Britain on Thursday night claimed the evening card at Chelmsford.

A flurry of snow started little more than half an hour before the scheduled off time of the first race at 5.50, but it soon became clear that it was settling on the course.

A group of jockeys, officials and vets inspected the course just before 6.00 and the official announcement that racing had been cancelled came shortly after.

Clerk of the course Andy Waitt told At The Races: "It's not just the course, it's everything. We have the service roads, which we salted but have iced over again. There would be cars going round there at speed, it wouldn't be funny. We've also got health and safety issues with the walkways."

He added: "We've got to think about the people looking after the horses, the horses and of course the jockeys."

Waitt also commented on the speed with which conditions changed. "We had heavy rain this afternoon, after that you'd never have thought that snow would settle on it so soon afterwards," he said.

Chelmsford may not be the only course to fall victim to the brief period of forecast cold weather. Both Sedgefield and Huntingdon will have to survive morning inspections ahead of scheduled Friday cards, at 7am and 8am respectively.

Officials at Wolverhampton, one of Friday's two all-weather fixtures, also announced that they were monitoring the situation with snow forecast.

FIRST PUBLISHED 6:33PM, JAN 12 2017
We had heavy rain this afternoon, after that you'd never have thought that snow would settle on it so soon afterwards