Tasty compensation for Brennan with Chase The Spud 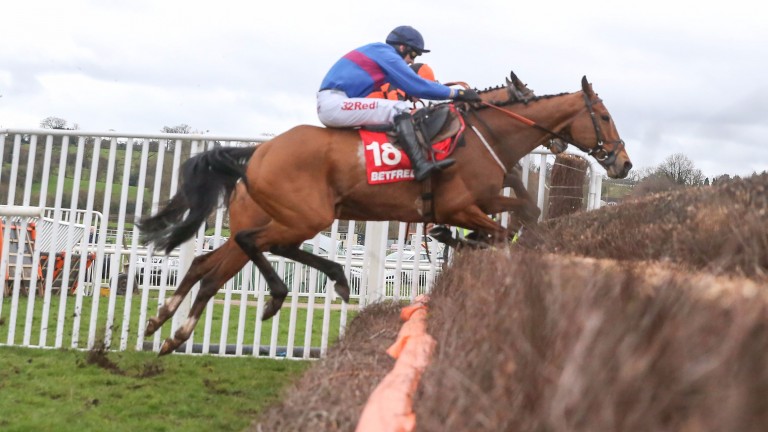 Chase The Spud (Paddy Brennan) on his way to victory in the Betfred Midlands Grand National
GROSSICK RACING PHOTOGRAPHY 0771
1 of 1
By David Carr 6:48PM, MAR 18 2017

Redemption can come quickly in the up-and-down world of jump racing and it took just a day for Paddy Brennan to start to wipe away his latest bad Gold Cup memory.

For the second year in a row he'd found himself on the turf at Cheltenham cursing Cue Card's ill fortune, yet 24 hours – almost to the minute – later he was celebrating, and vowing that the most popular chaser in training will bounce back too.

Chase The Spud is very different to Cue Card, a dyed-in-the-wool stayer who can get outpaced over the most extreme trips, but the Betfred Midlands Grand National is just his race, the second longest in the calendar.

And his bottomless stamina won him the day as he gradually overhauled Eider Chase winner Mysteree on the tacky, gluey ground, getting the best of a slow-motion finish to land the £125,000 handicap by a length and a half and cap trainer Fergal O'Brien's best ever season.

"He did it well," said Brennan, who was banned for two days (April 1-2) for using the whip without allowing his mount time to respond. "He missed the last and that probably helped as I had the other one to run at.

"If he never wins another race what he's done today is unbelievable, and I'm delighted for his owners – they've been really patient. It's brilliant, this is a race I've always wanted to win and I've done it now."

Of course, Brennan also wants to win another Gold Cup and he does not believe Friday's fall signals the end of Cue Card as a force at the highest level. Far from it.

"We didn't go that quick, it was a strange race, we really got busy down the hill and we were going as quick as at any stage of the race," he recalled.

"When I hit the ground the first thing I wanted to know was that he was okay – he'll be back at Aintree hopefully. They were going too slow to bring the best out of him."

O'Brien, who had gone close with Barney Dwan in the Pertemps Hurdle Final at Cheltenham on Thursday, had been full of hope approaching Uttoxeter's biggest day of the year.

"He was a bit of a monkey last time at Carlisle, but he'd run very well giving the second horse here 10lb at Haydock [in November]," said the trainer. "He has to be fresh and his lass Tori Knight does a great job with him.

"Christine Banks owns and bred him and she's been with me since I was training point-to-pointers. I'm delighted for her."

He added: "It's been a fantastic season. Barney Dwan ran a blinder in the Pertemps and Chase The Spud has done us proud. He missed the last but another gear kicked in and he got there in the end."

Could be an Aintree horse

Mysteree was 13lb worse off with the winner for their rematch and trainer Michael Scudamore was not at all downhearted by the nine-year-old's narrow defeat.

"You've got to be delighted with that," the trainer said. "If someone had said to me at the start of the season he'd win two and be second in this I'd have taken it.

"He'll have a holiday now and I'd love him to make up into a Grand National horse next season."