Angles and trainer quotes: all you need to know about the famous sprint 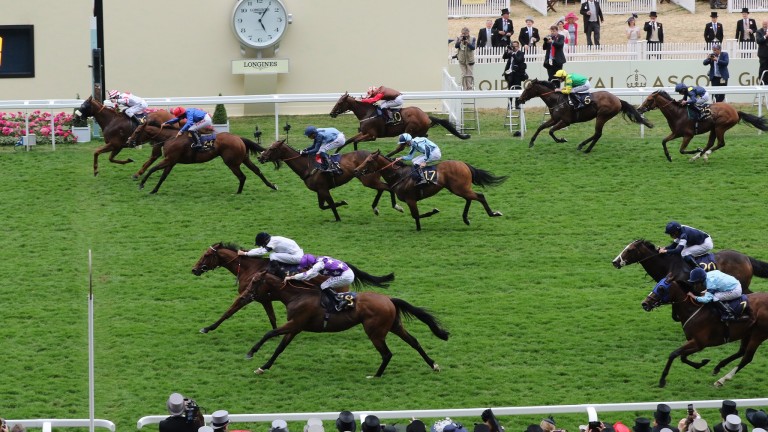 Soft ground has thrown an additional factor into the annual Stewards' Cup conundrum but there is no trainer better equipped to find the answer than Roger Charlton, who is seeking a fourth victory.

Charlton has scored with Harmonic Way, Patavellian and Genki and in Projection has a progressing sprinter with few miles on the clock who fell victim to an unfavourable draw bias in the Wokingham at Royal Ascot.

Drawn 28 there last time he finished first of his stands'-side group but only third in the race. Now he is drawn high again, one off the rail, but the slot has been deliberately chosen by connections of the Royal Ascot Racing Club horse.

He contested the consolation prize for this race 12 months ago when he overcame severe traffic problems to finish fifth.

Charlton said: "He ran a great race last time and ended up being on the wrong side. I’d be unsure about his draw again, although I’m not sure anyone quite knows where the best place to be is. He's drawn around good horses and the ground’s drying out, which will help. He’s going to the race in good order."

The Wokingham and the Stewards' Cup are the two major sprint handicaps of the summer so runners tend to contest both and it is not surprising to find the winner of the Goodwood race ran at Ascot.

As many as 14 of the last 18 winners of the Stewards' Cup were involved at the royal meeting and there is another strong representation here, including Projection (third) Polybius (fourth), Danzeno (fifth), Edward Lewis (sixth), Eastern Impact (seventh) and Raucous (eighth).

It has already been a memorable week in Sussex for David Simcock, who won the Lennox Stakes with Breton Rock on Tuesday, and the Stewards' Cup has been on his radar for some time with Polybius.

The six-year-old has not won for two years but finished just a neck down on Projection and followed that up by taking second place behind Danzeno at Ascot over 5f last time.

Simcock said: "This is a race for which we've planned for quite a while. We're worried about the ground. We have the draw [25] and have what we think are the right horses drawn around us.

"The five furlongs may have been just a touch sharp for him at Ascot but he ran very well. He has a good chance, running off a mark that's well within his capabilities. He's a good-actioned horse so that's why the ground is a concern."

Age can be key

Enable demonstrated the importance of weight-for-age with a commanding display in the King George last Saturday and it also comes into play in a race like the Stewards' Cup if a three-year-old can get into the field.

The last two winners have been three-year-olds, and last year the only other representative of that age group finished third.

There are only a couple of three-year-olds again this time – Sir Dancealot, for whom the booking of Ryan Moore looks significant, and Brian The Snail, of whom surely better was expected when he was bought by Godolphin as an unbeaten horse.

Sir Dancealot finished second in the Bunbury Cup and gets into this race on a mark 9lb lower than his new 110 rating.

Trainer David Elsworth said: "If the handicapper is right he'd appear to have a good chance. He was raised 9lb for his run in the Bunbury Cup but runs off his old mark. He likes to get his toe in and he'll get the six furlongs well. He's in great form so we'll throw our hat into the ring and see what we get."

“We're hoping that putting blinkers on him can bring about an improved performance.”

High, low or middle, there is a case for all

There is a powerful case for arguing that the winner will come from one of the high numbers with Sir Dancealot in 24, Polybius (25), last year's third Raucous (26), Projection (27) and last season's Wokingham winner Outback Traveller (28).

In the last five years the winners of the Stewards' Cup have either been drawn low or high, with the highest drawn coming from stall 26 – Rex Imperator in the 2013 – and three of the scorers having broken from single-figure stalls.

That evidence would suggest a draw in the middle is a negative but none of those runnings were in conditions as soft as they are likely to be on Saturday.

The sprint has only been run twice on good to soft or soft ground this century when the winners were drawn ten and 19, before the numbering of stalls was changed to left to right.

Mick Appleby, trainer of Danzeno and Poyle Vinnie
He's probably better at six and is pretty versatile ground-wise, although I'm hoping it will dry out a bit. Carrying top weight shouldn't be a problem. I think he'd have a good chance. Poyle Vinnie ran well there on Tuesday and should run a good race. The ground being on the soft side would suit him.

Richard Fahey, trainer of Growl and Eastern Impact
Eastern Impact is very capable on his day and we hope the cheekpieces can bring a bit more improvement. Growl will appreciate the ground and could easily run a big race under Connor Murtagh, who takes off a useful 7lb.

David Easterby, assistant to Mick Easterby, trainer of Perfect Pasture and Hoof It
Perfect Pasture's in good order, likes the ground and I can't wait for the race. Hoof It likes the track. We've one either side so depending on which way they go we should have one in the right spot. Hoof It had a couple of niggling problems earlier in the season. It's difficult to say a horse as old as him is as good as ever. That would be stretching it a bit, but if he's as good as he was last year that will be enough to get some prize-money.

David Griffiths , trainer of Duke of Firenze
If he gets six anywhere then it's at Goodwood – it’s that quick. I don’t think he’ll mind the ground. When he ran at York we weren’t going to run him 24 hours beforehand but it was a really good performance on soft ground. He'll love the track and he needed the run at Newmarket last time after having a break post-Ascot. He was only beaten two lengths if you take the impressive winner out of it. He's come on tons for it and on Monday he worked as if he is back to his 100 per cent best.

Andrew Balding, trainer of Donjuan Triumphant
We've been waiting for this ground for him. On his previous form with Richard Fahey he'd have to have a good chance.

Mick Channon, trainer of Mobsta
At least we have his ground. It's been a long time coming and if he can run up to his best he'll go well. The were only four left when his name came out of the hat and his draw was the best we could get.

Dean Ivory, trainer of Lancelot Du Lac and Stake Acclaim
The ground is probably a little too soft for Lancelot, who'd prefer good to soft. We're drawn in the middle so hopefully he can get on the better ground. If he's in the first ten I'd be over the moon. Stake Acclaim has got in on his merits without probably being good enough for the Stewards' Cup. He'll love the soft but six furlongs on it might be a bit too much for him.

David O'Meara, trainer of Intisaab, Edward Lewis, Al Qahwa
Intisaab would prefer it quicker. Soft ground is not really good for him. Al Qahwa loves it on the slow side and Edward Lewis is versatile. We didn't have a choice with the draw for Al Qahwa but the other two we've split so we have one high and one low.

Robert Cowell, trainer of Outback Traveller
He got a little bit lazy on the gallops with us after Ascot so we put a visor on him and he works brilliantly in them, hence the equipment is going on. He should run with plenty of gusto. Softish ground will be fine and he could be on the premises if he handles the track.

Charlie Hills, trainer of Shanghai Glory
He’s just started to come to himself and did the same last year – he just improved in the second half of the season. The ground was very quick when he ran in the Wokingham but we needed to get a run into him. The rain has been a big help to him.

George Baker, trainer of Harry Hurricane
I can't say he's going to stay six furlongs – he's got so much speed but Pat Cosgrave said he'd have won on Tuesday if he'd had cover. We'll ride him very cutely out the back, we'll sit and sit and wait to see what happens. We'll need a lot of luck.

FIRST PUBLISHED 6:00PM, AUG 4 2017
He is drawn around good horses and the ground’s drying out, which will help