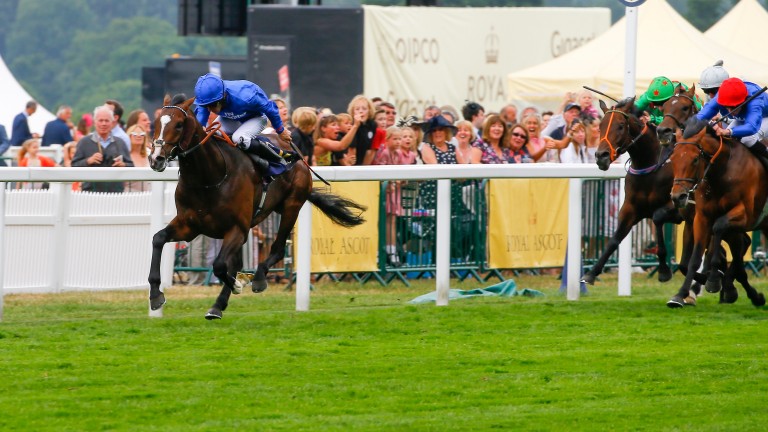 Roger Charlton does not mind admitting that Atty Persse has surprised him, but so far those surprises have largely been pleasant ones, with none more pleasing than last month's runaway success in the King George V Handicap at Royal Ascot.

This step up to Group 3 company in a race that is often regarded as a St Leger trial represents a fresh challenge for the Frankel colt. But while Charlton concedes that he faces no easy task on the book, a fourth success from only five starts would in this instance not be such a surprise, especially as he has been installed favourite to beat eight rivals.

Charlton said: "Atty Persse is a tough and hardy horse. I am a little surprised that he has gone from a mid-80s handicap win [at Sandown in April] to being favourite for a Group 3, but he's always had a reputation.

"This is quite a big step up for him in class terms, and in a field full of decent colts I would have thought Raheen House's fourth in the King Edward VII was better form, but while he will have to improve again he clearly relishes a trip and was very strong at the finish at Royal Ascot."

Nobody knew quite what to expect with Frankel's first crop, some of whom have been a shade too keen, but Atty Persse is by no means alone in proving a strong stayer.

Charlton said: "It's not surprising that Frankel is getting horses who stay a mile and a half and more. Cracksman is another who clearly stays well, and Roger Varian had a winner over a mile and three-quarters by Frankel last week.

"We weren't thinking St Leger for Atty Persse at the start of the year, but he's already only about sixth favourite [at 16-1] and if he were to win here we would have to consider it."

John Gosden trainer of Crowned Eagle and Face The Facts
Both will appreciate the rain and will get the best of the ground in the first. Crowned Eagle did not really handle Epsom last time but should find this more to his liking and has been in good form since. Face The Facts ran a good race in the Vase last time when not getting the smoothest of passages and should be in the mix.

Brian Meehan, trainer of Raheen House
He has an excellent chance after running with great credit at Ascot. I feel as though the step in trip can see him improve again. Jamie Spencer knows the horse well and I am confident of a big run.

Saeed Bin Suroor, trainer of Tamleek
This looks the right race for him. He ran okay at Royal Ascot, but I am hoping for a better result this time. He looks to be in good condition, is ready to go and the step up in trip should suit.

Aidan O'Brien, trainer of Wisconsin
We've been happy with him since his run in the Curragh Cup. He's in good form and the trip and the ground should suit.

Charlie Appleby, trainer of Wolf Country
He won a Listed race over a mile and a half in France at the start of the season and then was caught for a turn of foot in the shorter Dante Stakes.

FIRST PUBLISHED 6:00PM, JUL 12 2017
This is quite a big step up for him in class terms but he clearly relishes a trip and was very strong at the finish at Royal Ascot