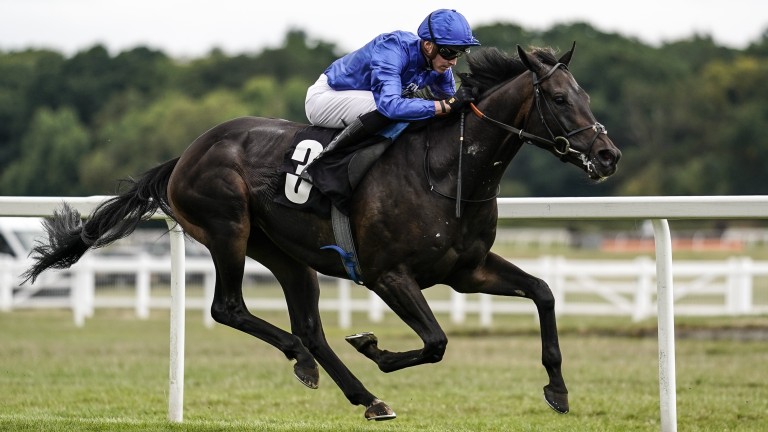 Winning run: Hamada made it five in a row with victory in the Geoffrey Freer
Alan Crowhurst/Getty Images
1 of 1
By Mark Storey UPDATED 8:26PM, AUG 30 2018

Derby winner Charlie Appleby spelled out his plan on Thursday to conquer the Melbourne Cup for Godolphin and complete a dream double for the team.

The trainer revealed Australia's premier event and the Derby were the two races he was tasked with winning when he was handed the Godolphin job five years ago.

Masar secured the first of those two objectives when landing the Derby in June and now Appleby has Cross Counter and Hamada primed for the Flemington showpiece on November 6.

Appleby believes both horses will be suited by the Melbourne Cup, which has yet to be won by a British-trained horse. Cross Counter, who broke the track record when winning the Gordon Stakes at Goodwood, is a top-priced 16-1 after being pipped by stablemate Old Persian in the Great Voltigeur Stakes at York last week.

Hamada is a general 16-1 after making it five straight wins with victory in the Geoffrey Freer Stakes at Newbury.

Success for either horse in Australia would crown an outstanding year for Appleby who has celebrated six Group 1s wins and secured more than £3 million in prize-money in Britain alone, his best haul yet, operating at a winning strike-rate of 29 per cent.

Appleby said: “When I was handed this position, the two races I was given to try to win were the Derby and the Melbourne Cup. We’ve landed one of them but we’ve been trying for many years in Australia and I hope we’ve got a couple of live shots going down there in Cross Counter and Hamada.

“With the experience of the last few years, I think they’re the right types for the race. I was delighted with Cross Counter at York. I know he went off favourite for the Great Voltigeur and he finished second, but he didn’t lose anything in defeat because I’m sure Old Persian is going to be a real player in the St Leger.”

Old Persian is a top-priced 8-1 for the Ladbrokes-sponsored Classic on September 15 at Doncaster where Appleby is confident of keeping his winning juggernaut rolling.

He said: “I think we hold a strong hand at Doncaster. We’ve left in Brundtland, who won at Clairefontaine the other day in a mile and a half Listed race and is now two from two, and Loxley, who won last weekend in the Grand Prix de Deauville. We’re toying with the Niel for him but we’ve not made our minds up yet.”

On further targets, he added: “We’re also very keen on Wild Illusion, our Nassau winner, who I think will go to the Prix de l’Opera and then on to the Breeders’ Cup, and I feel she’ll be very competitive in both.”

FIRST PUBLISHED 8:00PM, AUG 30 2018
With the experience of the last few years, I think they’re the right types for the race

What did we learn from the Tattersalls Stakes? Our experts assess Modern Games Charlie Appleby tees up another Breeders' Cup contender after Modern Games win Godolphin ace Hurricane Lane completes workout ahead of possible Arc bid Watch: Appleby and Dettori the Woodbine wonders after Grade 1 double on Sunday Appleby lands big North American double as Walton Street and Yibir score The Master is back and this time everything's looking more rosy for his trainer