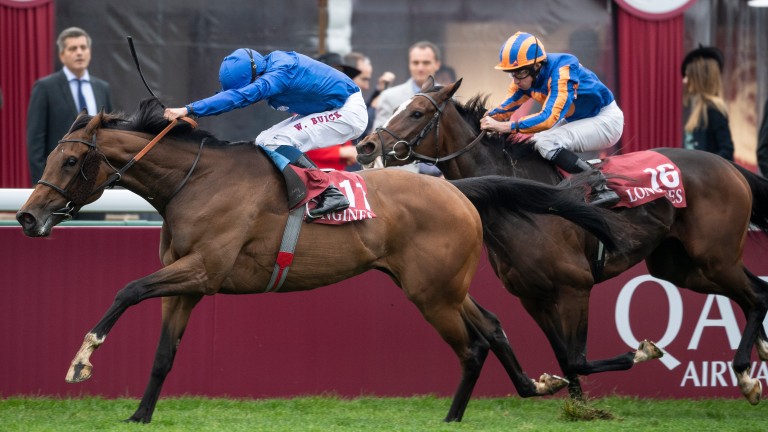 Wild Illusion: Renews her rivalry with Magic Wand, who she beat in France last time
Edward Whitaker
1 of 1
By James Stevens UPDATED 8:14AM, NOV 3 2018

Can Appleby double up?

The three-time Group 1 heroine has improved rapidly since her 1,000 Guineas fourth and Oaks and Ribblesdale seconds with impressive wins in the Nassau and Prix de l'Opera on Arc day.

Appleby said: "Her preparation has gone well and she has travelled great too so we're happy with her.

"She ticks a good few boxes coming into the race, the ground is soft, or at least on the slow side, and she has got proven form on that at Group 1 level as a juvenile. We've got a good draw [stall three] so she has a lot in her favour."

He added: "She does look really well and has still got her coat. She's shipped well and is taking everything in her stride."

New York trainer Chad Brown is eyeing his fourth victory in the race, having won three of the previous six runnings.

Sistercharlie is his leading hope from a powerful five-strong challenge. The four-year-old, who was second in the French Oaks last season when with Alex Pantall, has excelled since moving to the US, winning three from four this season, with all of those successes coming at Grade 1 level.

Brown, whose main contender last ran in August, said: "Sistercharlie is doing great. The layoff may be a blessing in disguise. She's won the three Grade 1s this year so is plenty fit and experienced, and now she's fresh. She's ready to go."

Thais, A Raving Beauty and Fourstar Crook also take their chance for Brown, alongside Santa Monica, who was last seen finishing third behind the Roger Varian-trained Sheikha Reika in the Grade 1 EP Taylor Stakes in Canada.

Brown added: "Santa Monica had a troubled trip [in the EP Taylor] and was boxed in most of the way and didn’t have any clear running until late.

"We felt because of that we didn’t really get to the bottom of her in that race."

Frankie Dettori, rider of Eziyra
The only bad thing is the draw – 14 of 14. It's a mile and three so we'll have to fiddle our way through the field. It looks a super-strong race but Dermot Weld would not bring her here if he didn’t think she had a chance.

Aidan O'Brien, trainer of Magic Wand and Athena
I'm very happy with Magic Wand. She's been unlucky. She's a big filly and we're thinking about her for next year, and the better the ground the better it will suit her. A mile and three is probably as far as she wants to go with ease in the ground, even though she won the Ribblesdale on fast ground. I’d imagine Ryan [Moore] will take his time on her. Things haven’t really gone smoothly with Athena this year. Rather than train her very hard we've had it in our head that she's a filly for next year. She'll be taking her time. Better ground would suit her. She's a very classy filly.

Gavin Cromwell, trainer of Princess Yaiza
She travelled over well and settled in great. I'm very happy with her. They've had plenty of rain and the ground is soft. I walked it and it's at least soft, maybe even heavy on the outside. There's pace inside her so I'm hopeful of a big run. She has to step up a lot but should run well and the ground will help.

Joe Sharp, trainer of Mom's On Strike
She's really come into herself as the year's gone on and gained more confidence. She likes Churchill Downs, the distance is going to help her and she can handle soft turf.

Todd Pletcher, trainer of Smart Choice
She's doing better all the time. She's put on a little bit of weight since she's been here. In an ideal world we'd have a little more time but I think she's steadily making progress.

FIRST PUBLISHED 6:36PM, NOV 2 2018
She does look really well and she's still got her coat, she has shipped well and taking everything in her stride

Can one-of-a-kind Jim Bolger pull off more Group 1 heroics with Poetic Flare? One trainer, one jockey, one horse and one race to note on Royal Ascot day one 'It's been a great week' - Charlie Appleby's amazing run of success continues Shadwell 'trimming' continues with more than 100 horses catalogued for July sale 'I like fast things - as well as Adayar I like to partner planes out of Duxford' Charlie Appleby reveals next step for Derby hero Adayar with Arc on the horizon