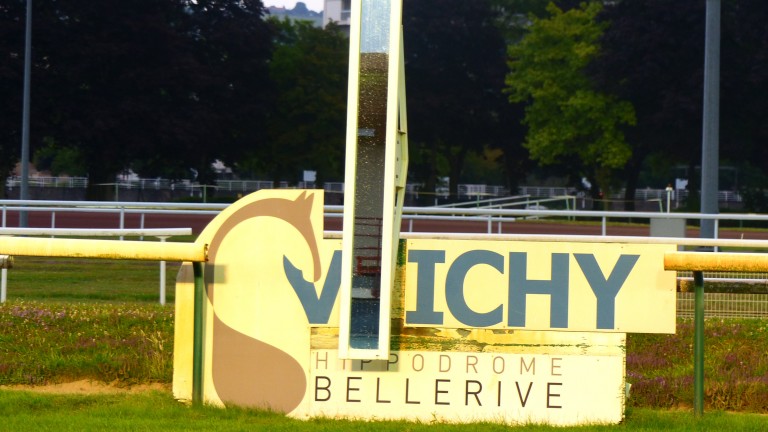 Vichy hosts the only meeting in France on Wednesday, with the feature handicap at 12.50
Racing Post/Scott Burton
1 of 1
By Scott Burton UPDATED 6:35PM, MAY 26 2020

Much of the first two and a half weeks of French racing's return has been taken up with weighing up how far forward horses from particular yards were coming out of the lockdown period.

Wednesday's big betting handicap features no fewer than seven of the first eight home from the same Chantilly race run over six furlongs a fortnight ago, and as such sets a different kind of test for anyone trying to solve the riddle.

Kilfrush Memories did best of those chasing easy winner Goldino Bello at Chantilly, and has a length and a quarter in hand over his next nearest pursuer Tudo Bem, with the same distance back to Soho Starlight and the rest.

A different line of form involves four-year-old Air De Valse, who comes here not from the school of hard-knocking sprint hadicaps but a fine third-placed effort behind Spinning Memories in a Longchamp Listed race over seven furlongs.

Bakoel Koffie also arrives here from conditions and stakes races and has a workable mark, having been supplemented by connections.

Mauricio Delcher Sanchez, trainer of Bakoel Koffie
He is beginning to find life a bit tough in Group races and he has come down to a rating that makes handicaps feasible. This will be a first try in this grade and, although it is something of a comeback run, sprinters are a lot easier to get fit than middle distance horses.

Corinne Barande-Barbe, trainer of Air De Valse and Hopeless
They are both well although both are running over a shorter trip than is their norm. Air De Valse ran really well in the Listed race over 1,400 metres [seven furlongs] at Longchamp. She is really a 1,200 metre [six furlong] filly and there was the option of running in the Prix du Palais-Royal on Thursday but she would be back up against Spinning Memories as well as the colts.

Alex Pantall, trainer of Slickteg, Soho Starlight and Mutrah Fort
Mutrah Fort would probably appreciate a bit more give in the ground but all three are effective at this trip and all would have benefited from their comeback runs. Slickteg really needed it at Chantilly and should have come on for that. We haven't been too lucky with the draw as they are all drawn out on the wing, which is a bit of a worry.

Mathieu Boutin, trainer of Tudo Bem and Orangefield
Dropping back in trip will be no problem for Tudo Bem, who has a lot of pace and prefers a straight track more than anything, whether it is over 1,000 metres [five furlongs] or 1,200 metres [six furlongs]. I doubt there will be too much soft in the final going description as there is not much rain around but he goes on anything. Orangefield was unlucky as he got hemmed in at a crucial stage at Chantilly. He also has a win over course and distance to his name and is very well but these races are never easy.

Read exclusive previews of French racing every day from 6pm on racingpost.com