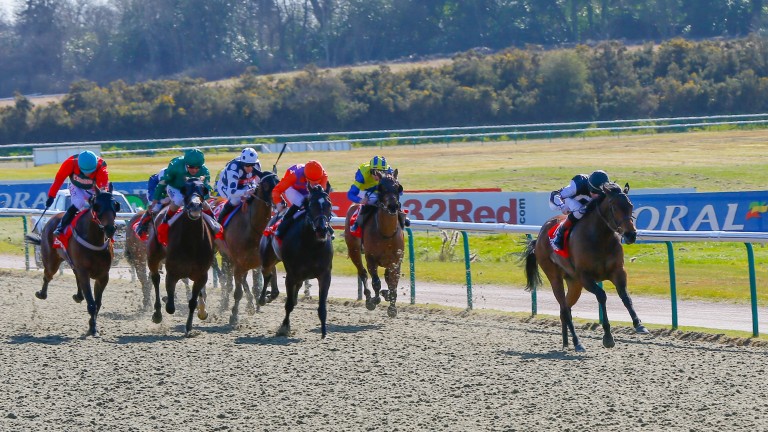 Volunteer Point (right): finished fourth in the Deauville contest 12 months ago before going on to win at Lingfield
Mark Cranham
1 of 1
By Michael Robson 1:44PM, DEC 27 2016

Trainer Mick Channon is confident Volunteer Point can strike in France on Wednesday as she continues her build up towards a repeat bid for success at the lucrative all-weather championships in April.

But the filly is set to face a stern test from another British challenger, the highly rated Realtra, in the Prix Miss Satamixa at Deauville.

The winner of the extended 7f contest on Polytrack is given a free guaranteed place in the £150,000 32Red All-Weather Fillies' and Mares' Championships Stakes at Lingfield on Good Friday.

Volunteer Point finished fourth in the Deauville contest 12 months ago before going on to win the Lingfield race this year. She showed her wellbeing with a victory at Wolverhampton last month and Channon said: "She's absolutely thriving. Her wide draw isn't ideal but I think she will win.

"The plan is then to give her a run at Chelmsford before going for the big race again on Good Friday."

Realtra is officially rated 12lb superior to Volunteer Point but has been absent since October 2015, when she was an unlucky-in-running fifth in the Group 1 Sun Chariot Stakes.

"She had a setback in the spring and was ready to run about a month ago but there was nothing suitable for her," said Roger Varian.

"She's been training well and should run well, though she'll not be fully wound up. The idea is to go to Dubai this winter, with the Cape Verdi and Balanchine possibilities."

He added: "We aren't thinking about the big race at Lingfield at present, although that might change if she won at Deauville as she would be automatically qualified for it."