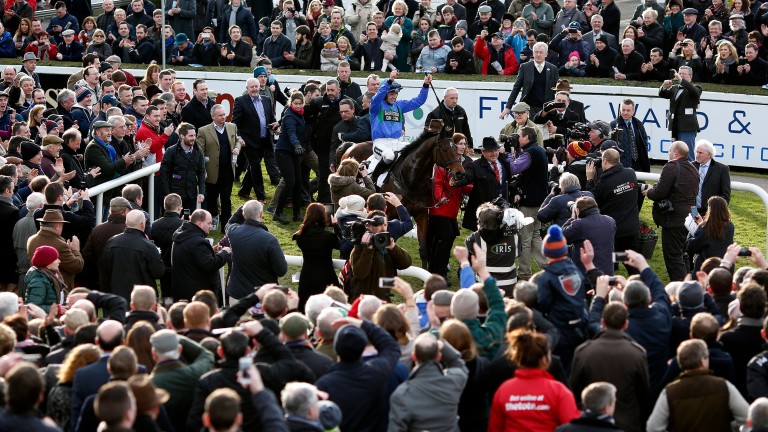 An Irish Champions Weekend-style jumps meeting will take place at Leopardstown on February 3 and 4 in 2018 with seven Grade 1s and prize-money rocketing to €1.5 million.

The two-day extravaganza, which will host 15 races, is set to combine the feature races from Leopardstown’s current three stand-alone meetings in late January and February and is positioned equidistantly from Leopardstown’s Christmas festival and the Cheltenham Festival in the calendar.

Just a few months after Irish-trained horses won a record-breaking 19 races at the Cheltenham Festival, Horse Racing Ireland and Leopardstown have teamed up to create the new initiative on home soil with prize-money for the two days set to rise to €2.1m by 2020.

Brian Kavanagh, chief executive of HRI, is hoping the new venture with increased prize-money will attract British connections to Leopardstown.

"The HRI board enthusiastically supported the proposal from Leopardstown to create a new two-day festival of jump racing in early February and has agreed to enhance its prize-money commitment to the weekend to reflect the increased sponsorship and racecourse contribution," said Kavanagh.

"HRI believes that the new festival, featuring 15 top-class races, will be very popular as it fits nicely between Christmas and Cheltenham, and will offer perfect opportunities for the top horses not just from Ireland, but Britain as well. We would also hope to attract a large number of overseas racegoers to Leopardstown for the weekend."

The BHP Insurances Irish Champion Hurdle will be the feature event on Saturday, February 3 with the Frank Ward Solicitors Arkle Novice Chase and one other Grade 1 set to make up three top-tier events on the card. The coral.ie Handicap Hurdle and coral.ie Chase will also feature on day one, while a Grade 2 bumper is also expected to be on the running order.

The Stan James Irish Gold Cup, won this year by Cheltenham Gold Cup hero Sizing John, will be the highlight of an eight-race card on Sunday, February 4. The Spring Juvenile Hurdle, Deloitte Novice Hurdle and Flogas Novice Chase will make up the quartet of Grade 1 contests on what promises to be the highest-quality weekend of racing that Ireland has ever hosted. 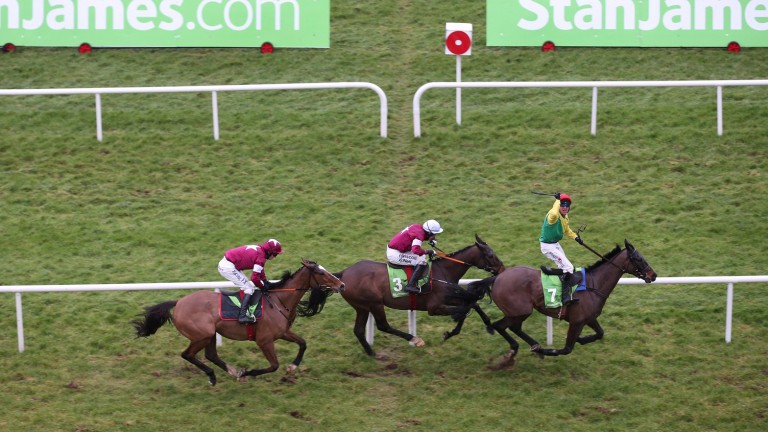 The two-day festival will offer prize-money of €1.5m in 2018 with plans to increase that fund for the following two years, rising to €2.1m in 2020. This represents an increase of 50 per cent on this year’s prize-money for the equivalent races.

The full race programme and the prize-money to be offered over the next three years will be announced within the next month.

It is another feather in the cap of Leopardstown, which has performed consistently well for the first three years of Irish Champions Weekend each September, and the track's chief executive Pat Keogh is hugely excited about the new development.

"In the same way that Irish horses target the big spring festivals at Cheltenham and Aintree, our race programme and the prize funds are designed to ensure British trainers and owners will be keen to target a wonderful weekend of top-quality and high-value jump racing."

The new meeting falls on a weekend that traditionally hosts Sandown's Scilly Isles Novices' Chase. But it still rates a potential lure for trainers sending runners to Cheltenham's Trials Day a week earlier.

Harry Fry, one of JP McManus's trainers and a familiar raider at the Punchestown festival said: "It sounds very interesting. We haven't been over at that time of year necessarily for those sort of races but it sounds an exciting proposal and we would give it plenty of thought and be looking closely at it.

"Generally we don't mind travelling after the Cheltenham Festival but this is a new initiative and we would have to see what possibilities there may be."

Jonjo O'Neill saddled two runners in this year's Irish Gold Cup at Leopardstown but only a field of four contested the Irish Champion Hurdle and they were all from Ireland.

Great way to showcase our talent

Another jewel for Irish jump racing – a shiny diamond that will earn admiration all over the world. This is a move that makes perfect sense; a winter wonderland to warm us all up before the madness in March.

What Horse Racing Ireland and Leopardstown have cleverly done is pick the best pieces of meat from the bones of their post-Christmas action and serve them up on one big, luxurious platter. It has us all salivating already and it is only mid-June.

Nineteen of the 28 winners at Cheltenham last March were Irish-trained. Now is the perfect time to cash in on that dominance and hosting an Irish Champions Weekend-style event over jumps at Leopardstown is the best possible way of showcasing our wealth of talent right now.

There were three meetings at Leopardstown in four Sundays between the middle of January and early February this year. That was too many. It was diluting the appeal of both the Irish Champion Hurdle and the Irish Gold Cup. Now we have a two-day festival that will draw eyes and feet from everywhere. It is the best show in town between Christmas and Cheltenham.

It is potentially not great news for British racing, but only if the trainers of the leading performers decide to target the weekend. And given there is an established programme in Britain, that is by no means a certainty.

WHAT THE PROFESSIONALS SAY

Davy Russell, jockey
We are world leaders in racing both on the Flat and over jumps. This weekend will provide us with the opportunity to showcase everything jumps racing has to offer to an international audience. We are a sporting nation and the strength of jump racing at present is remarkable, so it is great to see there is an appetite for this. Historically, these races have worked out very well, and the calibre of horses on show will be top class.

Robbie Power, jockey
This is brilliant news. It's a great idea. The key thing here is the timing. It is right in the middle of Christmas and Cheltenham, and that will mean we will see a lot of the horses being aimed at Cheltenham turning up at Leopardstown. It is a great chance for Irish racing to show what it is all about and they are two days that I am already looking forward to.

Henry de Bromhead, trainer
I think this is a very positive move and I cannot see any reason why it will not work. It is very exciting for anyone involved in Irish National Hunt racing and the key thing now is to try to have some runners to run that weekend. It is terrific timing too. There is a big enough gap between that weekend and Cheltenham so it is all positive from me anyway.

FIRST PUBLISHED 1:36PM, JUN 15 2017
HRI believes that the new festival, featuring 15 top-class races, will be very popular as it fits nicely between Christmas and Cheltenham