Champions to test skills in kitchen for Injured Jockeys Fund 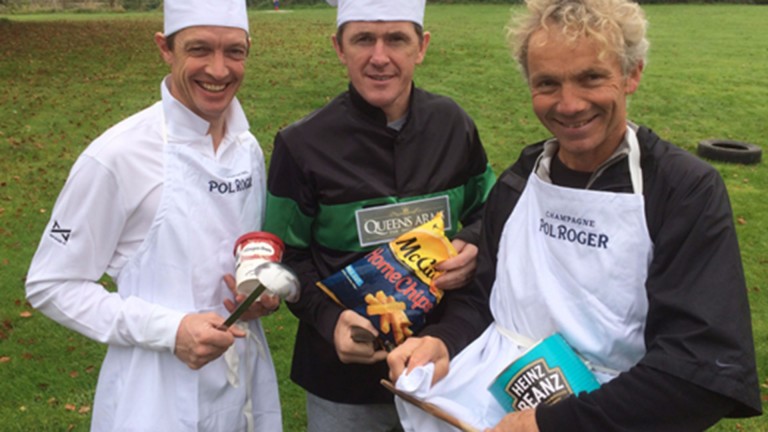 Richard Hughes, Sir Anthony McCoy and John Francome will swap the saddle for the kitchen
1 of 1
By James Burn 9:51AM, NOV 8 2016

We all know how good champion jockeys Sir Anthony McCoy, Richard Hughes and John Francome were in the saddle, and now one charity auction lot at Cheltenham on Friday will give people the chance to see how good they are in the kitchen.

The former riders have agreed to cook a three-course meal at the Queens Arms in East Garston near Lambourn for 20 people, and the item will be the last of 15 lots to raise money for the Countryside Alliance and Injured Jockeys Fund.

They will be auctioned at the Countryside Alliance lunch at Cheltenham on Friday and the successful bidding party can perhaps look forward to chilli prawns – Hughes's signature dish – a roast from Francome, while McCoy is on pudding duty.

Freddie Tulloch, who runs the Queens and is on the Countryside Alliance committee, says: "The thinking is for them to come up with their own dishes, and I think they've agreed to do what they specialise in, so John's going to do the main course and apparently he's a master of the roast.

"It could be the chilli prawns by Hughesie, followed by the roast, and from what I've heard from AP [McCoy] the dessert will involve quite a lot of chocolate. His wife Chanelle says since he retired he's learned a couple of buttons on the microwave, but hopefully we'll persuade him there are other ways to cook once we get him in the kitchen.

"They'll be backed up by our three chefs and our head chef Andy Rolfe – he's racing mad and can't believe he's going to have those three in his kitchen.

"A dinner for 20 isn't like knocking up a dinner party for six or eight; it's about getting the timings right, but Andy is pretty relaxed. He's not a Gordon Ramsay so I don't think they'll be abused in the kitchen!"

Chanelle McCoy and Hughes's wife Lizzie have agreed to be waitresses, and Tulloch adds: "We've seen what's happened to Freddy Tylicki and I so admire what these jockeys do. Hopefully we can raise a substantial amount, so at least when horrible things do happen there's a cushion to help."

Interest in the lots, which also include a nomination to see Melbourne Cup winner Dunaden, 2017 men's singles final tickets at Wimbledon, and lunch with Albert Roux on the Wednesday of the Cheltenham Festival, can be registered by emailing sara-rutherford@countryside-alliance.org.