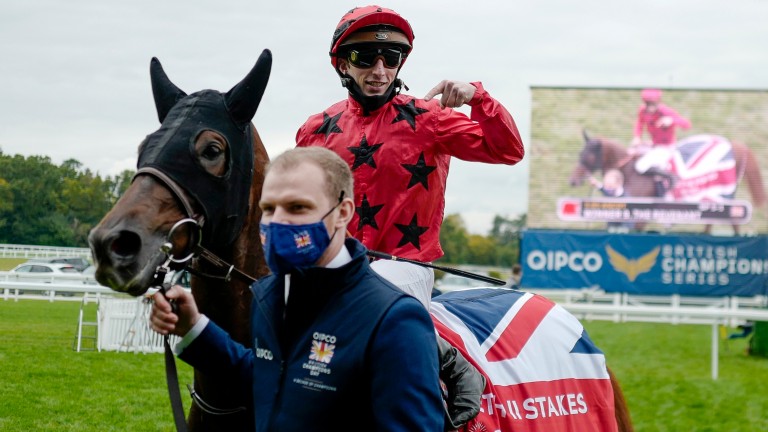 Pierre-Charles Boudot gives thanks to The Revenant after their victory in the QEII
Alan Crowhurst
1 of 1
By Matt Butler UPDATED 6:49PM, OCT 17 2020

Second in the race behind King Of Change last year, The Revenant returned to action only on Arc weekend when a comfortable winner of the Prix Daniel Wildenstein, but Graffard revealed before the QEII his absence was not due to anything untoward, merely a ploy to save him for the soft conditions he evidently thrives in. It certainly worked a treat.

Pierre-Charles Boudot had the five-year-old, previously trained by Hugo Palmer, prominent throughout and he picked up with Palace Pier to chase leader Roseman. Entering the final furlong Palace Pier wilted – a lost front shoe was possibly a contributing factor – and Boudot edged The Revenant over to eyeball Roseman, getting the better of the Roger Varian-trained longtime leader to win by a head.

Graffard, who was not at Ascot, said: “It was a magnificent performance, the horse was brilliant. It went exactly as we had planned with him settled in behind Circus Maximus and close to the pace. He picked up really well and ran all the way to the line while Pierre-Charles gave him a great ride as always.

“This has been the plan ever since he was second in the QEII last year and everything was geared around coming back. 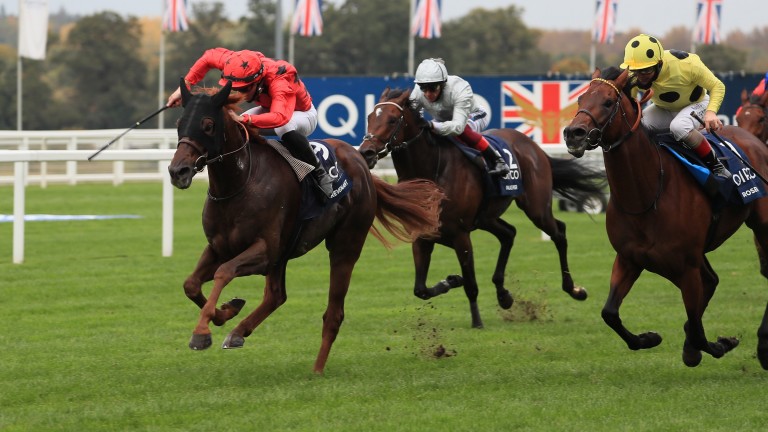 “I had him ready to run in the spring but when lockdown came I decided to send him out to grass and he had a good spell.

“I had to wait until the Daniel Wildenstein for his comeback and he was only 80 per cent fit for that race. I was a little bit stressed that I had to work him quite hard in the run-up but everything was building to today. It all worked out because he is a very good horse with a lot of heart.”

For The Revenant’s rider Boudot it was a first Champions Day success after going close with One Master in the sprint earlier on the card.

Boudot said: “Today I was very confident with his trainer and the horse did it well on the track.

“He loved the ground and the trip has been perfect behind Circus Maximus. My horse was very relaxed behind him and when I asked him, he gave me a nice and long turn of foot. He has been courageous in the last furlong.”

It was a significant step forward for runner-up Roseman, who had hinted he was up to Group 1 level when fourth in the Queen Anne Stakes at the royal meeting, but things did not go to plan for Palace Pier, who arrived at the start with a small amount of blood in his mouth.

He was passed fit to run by a vet and travelled into the race alongside the eventual winner, but he could not continue through with his challenge and faded into third, although the lost front shoe likely did not help.

His rider Frankie Dettori said: “You can’t go a mile with just one leg, you have to use both and I tried to get him to change. It was very unlike him. Obviously you can’t win a race with three wheels, you need all four.”

FIRST PUBLISHED 3:20PM, OCT 17 2020
This has been the plan ever since he was second in the QEII last year and everything was geared around coming back