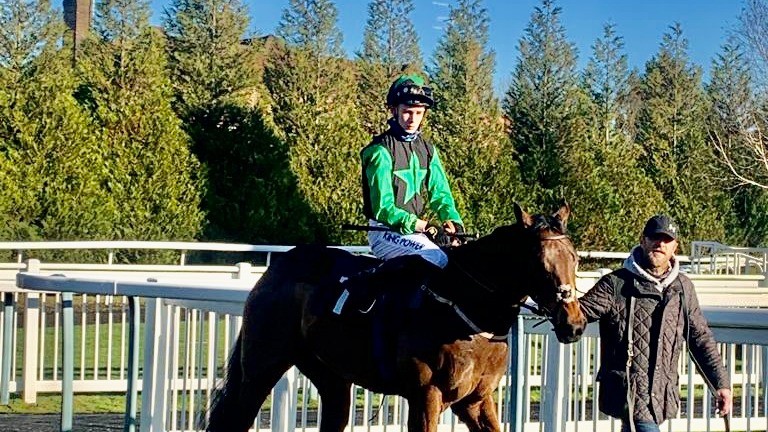 Jockey Harry Davies is led in after his first winner on Coolagh Magic at Lingfield on Friday
1 of 1
By Andrew Dietz UPDATED 5:22PM, JAN 14 2022

Davies, 17, showed a cool head as he timed his challenge to perfection to get the Robyn Brisland 2-1 winner home by a nose from Big Time Maybe in the 6f apprentice handicap.

Attached to the powerful Andrew Balding stable, Davies made his debut at Southwell on Tuesday, finishing sixth on Battered for Hugo Palmer, for whom his mother Angie is assistant trainer.

Speaking after the landmark success, Davies told Sky Sports: "I'm delighted. When I heard I got the ride I was really excited as I thought he'd go close and I'm just happy I've been able to get his head in front."

Davies had his mount settled in the rear off a furious early pace set by Molly Presland on One Day before picking off his rivals in the home straight.

"I learned a lot on my first ride and I'm really grateful," he added. "Mr Brisland said to me ideally we'd want to be dropping him out and sitting in last. I thought there was plenty of pace on paper and they'd come back to me and, fortunately, that is what has happened."

On his position at the famed Balding academy at Kingsclere, which has produced the likes of Oisin Murphy, William Buick and David Probert, Davies said: "It's a great place to be and Andrew is very good with his apprentices. The lads that have come through there, it's quite impressive, and when they come in to ride work I get to learn a lot from them."

During his time on the pony circuit, Davies won 28 races and was crowned twice Charles Owen Racecourse Series winner in 2018 and 2019.

Apprentice Christian Howarth recorded his first double with victories on Nuble in the 1m2f fillies' handicap and Silverscape in the 1m2f handicap.

The 7lb claimer, who is in his second season, partnered Nuble to a hat-trick for his boss Marco Botti before bringing up the second leg on the Roger Teal-trained Silverscape.

Liam Keniry was banned for three days (January 28, 29 and 31) for careless riding when his mount Already Gone drifted left and caused Achnamara to become unbalanced against the rail in the Silverscape race.