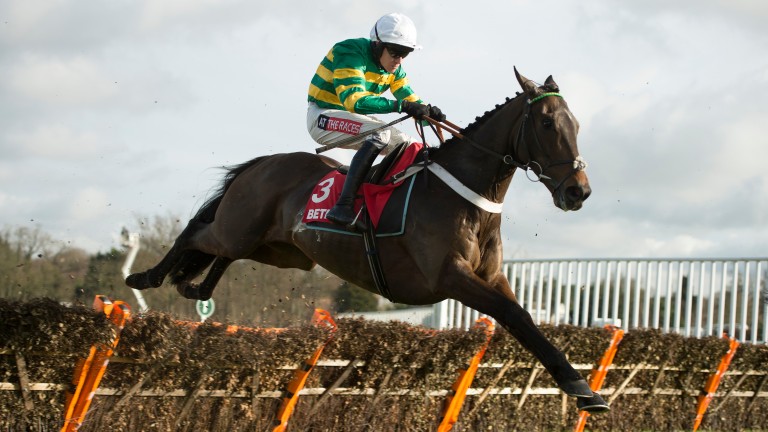 A brains trust that includes Nicky Henderson, Barry Geraghty, Sir Anthony McCoy, JP McManus and racing manager Frank Berry is unlikely to get too many decisions wrong and their plan to send Grade 1-winning novice hurdler Buveur D'Air back over hurdles looks inspired after a hugely impressive victory.

In winning without coming off the bridle, the six-year-old may not have proved much more than his slickness over a hurdle, but he passed Grade 2 winner Rayvin Black and dual Grade 1 winner Irving with the same sort of ease you would imagine Einstein did his 11-plus.

And Henderson revealed he wanted to make the switch back to hurdles before the news of Faugheen's latest setback broke.

He said: "I said to Barry at Cheltenham last week that I wanted to switch Buveur D'Air back to hurdles before they announced Faugheen was out. We've talked about it throughout the week and he hasn't proven anything to anybody today, we know that, because on those terms he should have won like that.

"I think at this stage of his life I think he might just be a sharper hurdler than he is a chaser. Barry said he can make a length at his hurdles but he can't do that over fences. He's very quick, very slick, and very pacy too.

"Barry said he took a fair few blows but that doesn't surprise me as there's room to get him fitter. That is the road we are now going to take, you can take it that's where he's going to go. I don't think we're suddenly going to bounce him back to the Arkle."

Explaining the decision to switch back to hurdles further, Henderson added: "His jumping is very good, he's done nothing wrong – he was very good at Haydock, I thought he was a bit flippant with some fences at Warwick but I just felt in my heart he might be a better hurdler.

"He's such a talented young horse. He beat Petit Mouchoir at Aintree, we know Annie Power's not coming and it looks wide open now."

On whether his lack of a difficult race this season could be a factor Henderson added: "If I think he needs testing I can do plenty with him at home, he's had a couple of good blows and he won't be sitting at home doing nothing until March. He likes soft ground, he'll never run on fast ground put it like that, but good ground is fine.

"It was good enough ground in the Supreme last year and he ran a very good race. He had to switch around horses and everything got first run on him a bit, so he probably could have finished second to Altior and anything that finishes second to Altior is a good horse because they have to go a bit to go with him."

FIRST PUBLISHED 2:10PM, FEB 4 2017
But he won in fine style, not needing to come off the bridle to beat Rayvin Black by a length and a half