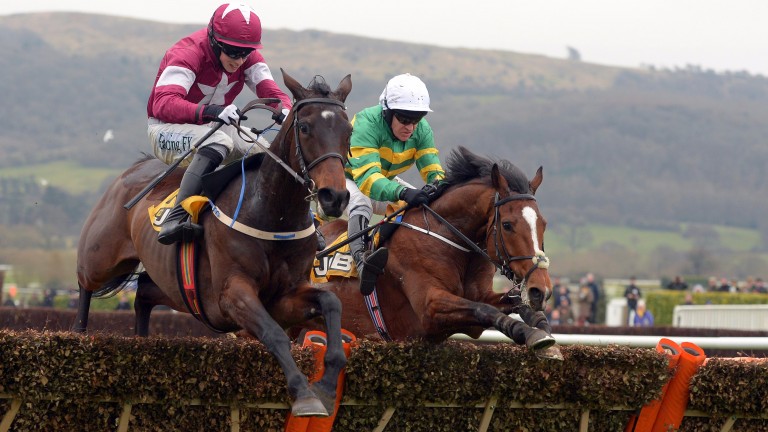 With Ivanovich Gorbatov not declared, Apple’s Jade will get her season under way without bumping into that rival for the fourth time.

Since finishing second in the Triumph Hurdle at Cheltenham last March, the Gigginstown House Stud-owned filly has created a massive impression by slamming her four-year-old counterparts at the Aintree and Punchestown spring festivals.

A general 8-1 shot for the Stan James Champion Hurdle, Apple’s Jade will be bidding to provide Gigginstown with back-to-back victories in this feature hurdle following the victory of the Henry de Bromhead-trained Identity Thief 12 months ago.

De Bromhead's Petit Mouchoir, similarly owned by Gigginstown, poses the biggest threat to the favourite with the five-year-old having his final start over hurdles before tackling fences this season.

Gigginstown racing manager Eddie O’Leary said: “Both horses are ready to take each other on and the ground should be okay for them.

"Gordon [Elliott] said Apple’s Jade worked very well during the week and is ready to start off.  As for Petit Mouchoir, this is his last start over hurdles and he'll be going chasing afterwards. He has taken a hold in the past and we'll see if he settles here Henry de Bromhead is happy with him.”

Rashaan looked like a potentially top-notch juvenile last season when beating Missy Tata in a Grade 3 contest at Fairyhouse in November. His form tapered off but trainer Colin Kidd believes he does not handle deep conditions, and is likely to give his stable star a winter break this season.

Kidd said: “I couldn’t be happier with him. Ideally, I wouldn’t like to make it with him but I'll have to speak to Sean [Flanagan, jockey]. We learned last year he doesn't handle deep heavy winter ground, so as soon as the word heavy comes into the going descriptions he'll get a break and we'll bring him back for the spring. There’s good prize-money on offer here and I'm happy with him.”

James Nash believes My Manekineko is in good form, and the three-time hurdles winner is bidding to take home as much prize-money as possible.

Nash said: “He's coming to the end of his season and is in good form. He needs this nice ground so that's a big plus. There’s lots of good prize-money on offer for the placings and we're going to try to get as much of it as we can.”

This year's Triumph Hurdle winner Ivanovich Gorbatov looks set to begin his campaign on Sunday, trainer Joseph O'Brien saying: "We are more than likely going to go to Naas with him now. He's in very good form and is just ready to start off."