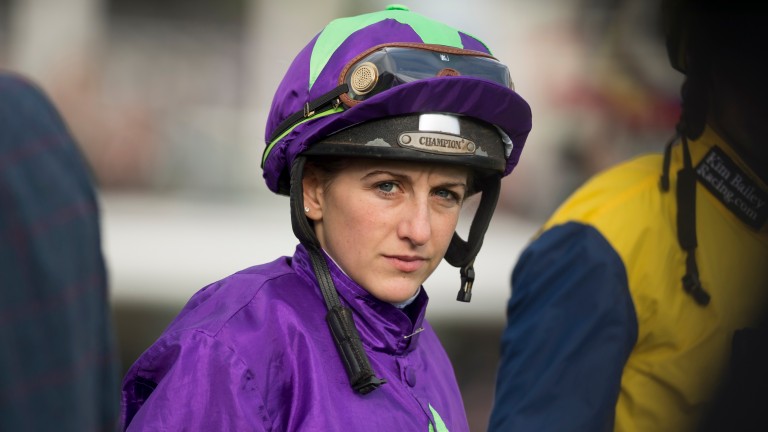 Josephine Gordon: now part of the Hugo Palmer team and excited about To Be Wild
Edward Whitaker
1 of 1
By James Burn 4:19PM, NOV 21 2016

Josephine Gordon, champion apprentice in Britain this season, capped a fine year when starring in an international jockeys' challenge in Barbados on Saturday.

She partnered Super Heights and The Price Is Right to victory in the first two legs at Garrison Savannah racecourse, before Probert struck on Johnny Cash and Baker guided Poetry In Motion to victory.

Gordon said on Monday: "It was brilliant, wicked fun. It was a good experience and I didn't really know what to expect; it's the first time I've been here. We won the challenge so were all buzzing off that, and the locals were loving it too.

"I'm going to stick around in the winter in Britain and give it a kick when I get back."

The Barbados five were not the only British-based jockeys taking part in an international event over the weekend, but a Frankie Dettori-led team were out of luck in South Africa.

That raiding party also included Hayley Turner, Pat Cosgrave, Robert Havlin and Fergus Sweeney, but they came off second best to their hosts, who were inspired by champion jockey S'manga Khumalo.

He rode a treble on the second day of the challenge at Turffontein on Sunday, when Dettori scored on Turn Back Time and Seattle Lady, while Cosgrave partnered Reef Of Fortune to victory on the opening day at Fairview on Friday.

Havlin, who got married to fiancee Kelly in Mauritius on the way to South Africa last week, reckons it could have been a different story but for the weather.

Speaking from Sun City on Monday, he said: "It was fantastic, excellent. We weren't that far behind after Frankie's double and a lot of us had some good rides, but a boom of thunder hit and the South African lads dashed back inside – Fergus Sweeney had gone down early and was at the stalls on his own.

"It was on a code red for lightning and apparently the lightning can kill you out here, so it was abandoned. I think we'd have got upsides them."

FIRST PUBLISHED 4:19PM, NOV 21 2016
It was on a code red for lightning and apparently the lightning can kill you out here so it was abandoned, but I think we'd have got upsides them

'This place needs crowds' - Chester hopeful racegoers will be back on May 29 Vintage Frankie Dettori ride sees Falcon Eight swoop late in Chester Cup 'Racing faces a very difficult time - I'm probably giving Thady a hospital pass' It's not High Definition but Lingfield trials could still unearth an Epsom star Exciting Adayar could be the next Derby contender to boost a resurgent trial One trainer, one jockey, one horse and one race to follow on Saturday