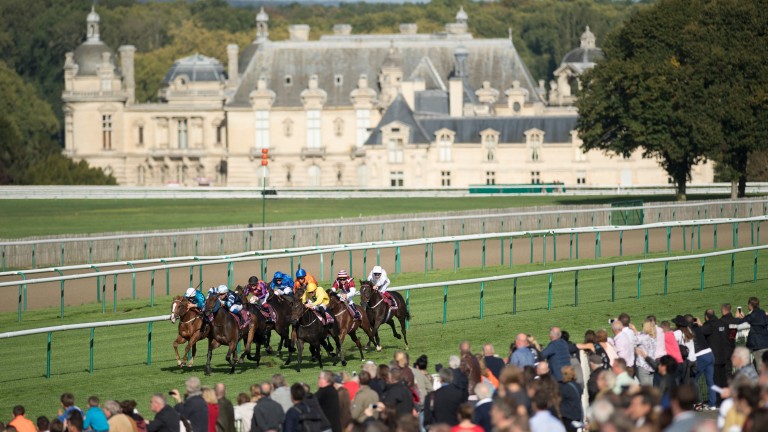 Chantilly hosted a high-quality trials card on Wednesday ahead of its Classic double header on July 5
Edward Whitaker (racingpost.com/photos)
1 of 1
By Scott Burton UPDATED 6:30PM, JUN 11 2020

Chachnak benefited from a late change of plan to score in the main  Prix du Jockey Club trial on Wednesday at Chantilly, the Group 3 Prix de Guiche.

A late non-runner for the Prix Greffulhe last Saturday, Chachnak was ridden patiently by Mickael Barzalona before delivering a strong winning effort.

In doing so he held off the challenge of Hurricane Cloud and Another Sky in a race in which the first five were covered by less than a length.

"He didn’t break well at Longchamp last time and my only orders were to get him away a little better," said trainer Fabrice Vermeulen. "He showed he wasn’t a bad horse and he has continued to progress at three. This allows us and the owners to dream a bit longer."

Paddy Power issued a quote of 16-1 for the Prix du Jockey Club for Chachnak, who was third behind Pao Alto and Ocean Atlantique in the Prix La Force on his most recent start.

Wangari produced a telling burst of acceleration under Pierre-Charles Boudot to score in the Listed Prix Finlande, a prep race for the Prix de Diane Longines back at Chantilly on July 5.

Wangari carries the familiar brown colours of Andre Fabre's wife Elisabeth, who also trains the daughter of Soldier Hollow alongside her husband.

"She ran a nice comeback on the sand last time and what she did there today was very good, she did it decisively," said Boudot. "She was still going well when the race started to unfold and, although when you ask her for her effort she can be a little cold, she has a real turn of foot."

Jean-Claude Rouget will not have been unduly upset to see the Aga Khan's Vadsena lose her unbeaten record in second, given that Christophe Soumillon barely saw daylight until deep inside the final furlong.

Wangari's win was a boost for her Deauville conqueror Tawkeel -  also trained by Rouget - ahead of a potential run in the Prix Saint-Alary on Sunday.

Ebaiyra lives up to early promise

Ebaiyra vaulted from two runner-up efforts in maidens to opening her account in ready fashion when easing to success in the Group 3 Prix de Royaumont under a motionless Christophe Soumillon.

A half-sister to the highly-tried Edisa, Ebaiyra clearly had no problem with the step up to a mile and a half, though trainer Alain de Royer-Dupre believes she could be just as effective if the decision is taken to drop back to an extended mile and a quarter in the Diane.

"She's a big filly and the first time she ran as a young horse it was heavy ground, while the second time she ran into a very good filly [Solsticia], who in my mind is one of the favourites for the Diane," said Royer-Dupre, who has trained the winner of France’s version of the Oaks on six occasions.

"We'll see about the Diane, she's shown a degree of class there. She stayed the trip there but has class and a long burst of acceleration that suits Chantilly well."

Power introduced Ebaiyra at 16-1 for the Diane, while cutting her conqueror Solsticia into 12-1 (from 20).

FIRST PUBLISHED 3:55PM, JUN 10 2020
"We’ll see about the Diane, she's shown a degree of class there. She has a long burst of acceleration that suits Chantilly well