Celebrating the best moments of a wonderfully memorable week 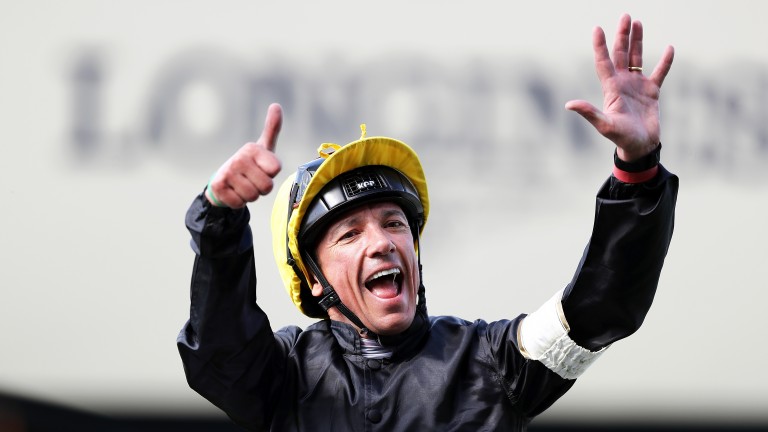 Royal Ascot had plenty of 'best' bits. The Racing Post's team picked out half a dozen

The starters proved the best course.

It all kicked off on Tuesday with Eve Johnson Houghton and Charlie Bishop celebrating the finest moments of their careers with Accidental Agent winning the Queen Anne Stakes.

There were tears and cheers from the rightfully emotional trainer, mainly owing to it being a family victory to treasure, with her mother Gaie being the owner-breeder of the big-race winner.

Calyx scored by a length in the Coventry Stakes but arguably made the greatest impression of all the winners during the week. The Kingman colt defeated his nearest rivals on the stands' side by six and a half lengths and looks a star for the future. 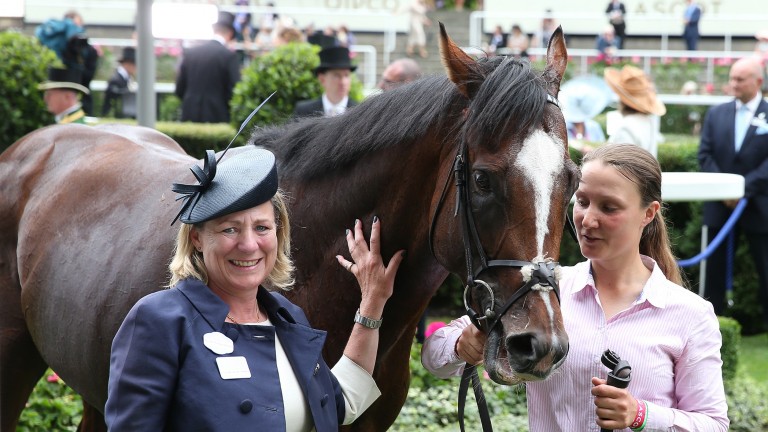 Accidental Agent's Queen Anne victory was emotional for trainer Eve Johnson Houghton (left) and her family
Caroline Norris (racingpost.com/photos)
Calyx initiated a 86-1 treble for John Gosden and Frankie Dettori, who stormed to the top of the trainer-jockey standings with Without Parole running out a straightforward winner of the St James's Palace Stakes and Monarchs Glen landing the closing Wolferton Stakes.

Blue Point posted a clear career-best performance to lower the colours of Battaash and Lady Aurelia in the King's Stand for Godolphin, William Buick and Charlie Appleby, while Willie Mullins continued his stranglehold on the Ascot Stakes with a fourth success in seven years courtesy of the Andrea Atzeni-ridden Lagostovegas.

And Tuesday was also a particularly good day if you landed the placepot, which paid a whopping £2,146.80 to a £1 stake.

For someone as relentlessly positive and upbeat as Wesley Ward, the first two days of this year's meeting must have tested his outwardly sunny demeanour.

"I'll tell you, I went to bed early last night. I kind of wanted to get rid of the bad luck and I was looking forward to the next few days," the trainer revealed following Shang Shang Shang's Norfolk win on Thursday.

Rather than stay up into the small hours trying to reinvent the wheel, Ward adopted the principle that tomorrow is another day, despite having to weather high-profile reverses in the King's Stand with Lady Aurelia and the Queen Mary with Chelsea Cloisters. 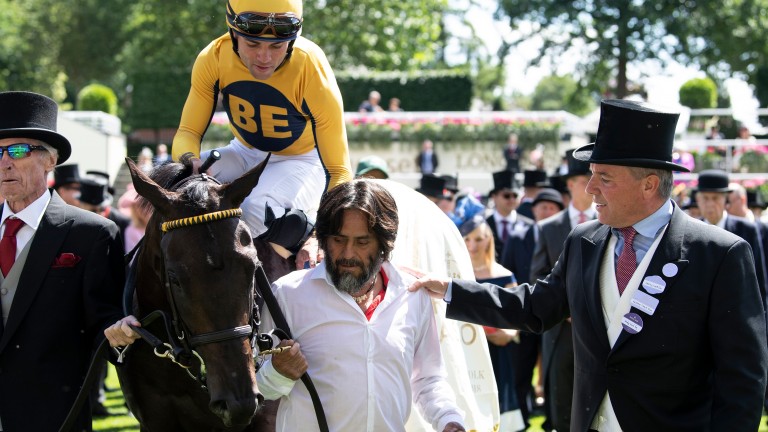 Wesley Ward (right) stuck to the game plan in the Norfolk Stakes and was rewarded when Shang Shang Shang made all under Joel Rosario
Edward Whitaker
Ward's runners have become synonymous with blistering speed, and there was surely a temptation to veer away from the tried and tested 'catch me if you can tactics'.

But Ward didn't panic, stayed true to a tried and tested method, and was rewarded with a tenth winner at the fixture as Shang Shang Shang bravely made all.

Sometimes the best decision is to do, and change, nothing.

Silvestre de Sousa: a champion through sheer volume of winners, but rarely a man to shine on the biggest stage. What a load of nonsense!

De Sousa was superb all week and his ride on Ostilio in the Britannia Handicap was an example of tactical acumen, skilled horsemanship and controlled aggression.

Jumping out into the lead – De Sousa is always dangerous in that position – Ostilio settled beautifully into a rhythm in a helter skelter, 30-runner contest.

Before halfway Ostilio started to drift across from the centre, where he headed a big pack, towards the stands’ rail. Instead of fight his mount to keep him straight, De Sousa went with the flow and allowed him to come all the way across to establish a healthy lead over his rivals. They would not get close to him. 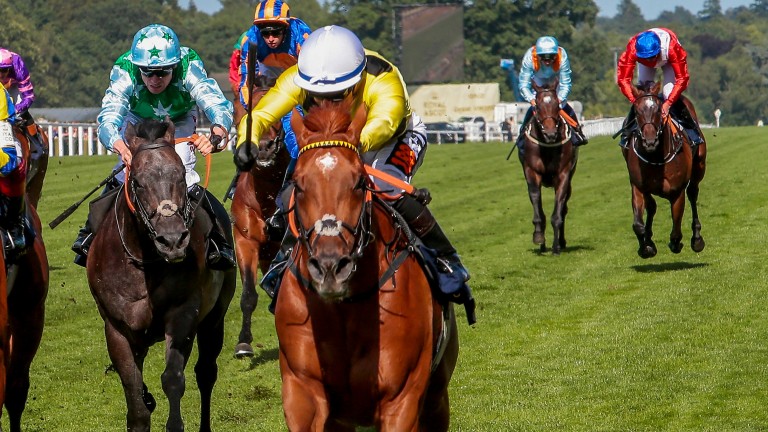 Silvestre de Sousa demonstrates his skill with Britannia success on Ostilio
Mark Cranham
De Sousa rarely misjudges the right time to give it his all and with two furlongs to go he decided that was the right time. In his typical all-action style, he gave his mount everything and at the line had just over a length to spare .

De Sousa was excellent on Dash Of Spice in the Duke of Edinburgh Stakes and came close to landing the Ascot Stakes and Hampton Court Stakes as well, all rides that showcased his top positional skills. A very good week from the champ.

Sir Michael Stoute might have earned this award solely for reviving the fortunes of last summer's star juvenile Expert Eye in the Jersey Stakes.

That, however, was the stable's least prestigious success in a fabulous week, sandwiched as it was between impressive Group 1 wins from Poet's Word in the Prince of Wales's Stakes and Eqtidaar in the Commonwealth Cup, Poet's Word taking Stoute past the Royal Ascot record of 75 by Sir Henry Cecil's after a rare blank in 2017.

A fourth win of the week with Crystal Ocean in the Hardwicke was the icing on the cake. It was the fourth time Stoute has enjoyed four wins at the meeting, but never before have they all been in Group races. It's doubtful, too, if his strike-rate has ever been better, as his 2018 team was a select one – more so than those sent by the likes of Aidan O'Brien, John Gosden and Mark Johnston. 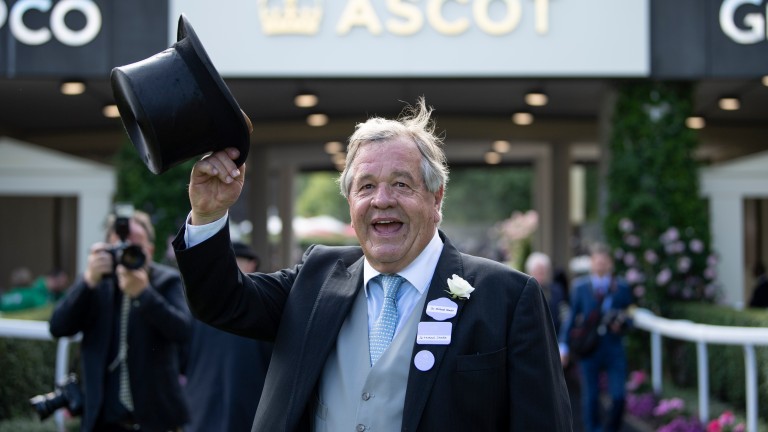 Sir Michael Stoute celebrates his Royal Ascot record after Poet's Word lands the Prince of Wales's Stakes
Edward Whitaker
When Expert Eye ran away with Goodwood's Qatar Vintage Stakes 11 months ago he looked to have the world at his feet, and the idea that we would be lauding his trainer for winning a mere Group 3 at Royal Ascot would have been laughable.

However, 11 months is a long time in horseracing, and Expert Eye had looked a shadow of the horse we saw at Goodwood when we saw him next in the Dewhurst, and then again this year in the Greenham and the 2,000 Guineas.

But Stoute's patience is the stuff of legend and he never lost faith. The rewards were reaped when Expert Eye bolted up on Wednesday, and he now looks ready to fulfil his potential.

Ed Walker had gone more than 30 tries without a winner before Friday, but making that a reason not to back his runners would have been a mistake.

Those who supported Agrotera from 14-1 to 11-2 for the Sandringham on Thursday were not concerned about Walker’s recent lack of success, which actually disguised the fact he had had seven seconds in the previous fortnight.

A win at Windsor in May on her third start had pointed to Agrotera’s potential, form boosted by victory for runner-up Four White Socks at Goodwood this month.

A handicap over a mile for three-year-old fillies, the Sandringham has twice been won in recent times by subsequent Group 1 winners. The unknown was how much Agrotera had in hand of her official mark on her handicap debut. 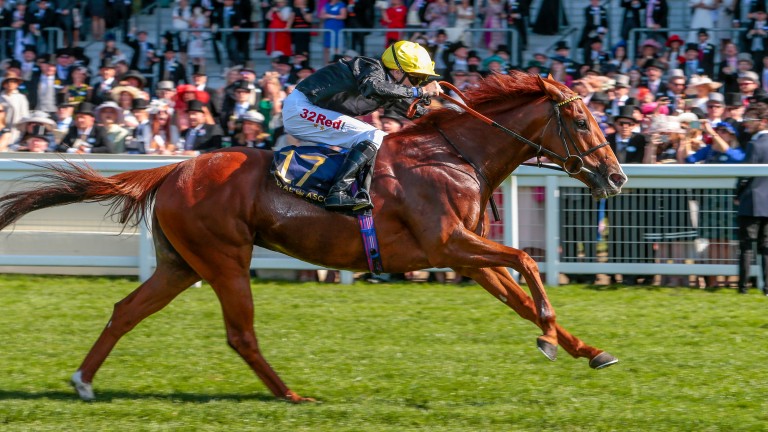 Agrotera, backed from 14-1 to 11-2 favourite, lands the Sandringham for Ed Walker under a coll Jamie Spencer ride
Mark Cranham
Walker expressed his confidence in the Racing Post before the race. Privately, owner Bjorn Nielsen had told jockey Jamie Spencer the daughter of Mastercraftsman had been working at home like a filly with nearly two stone in hand of her rating of 88.

Winner of the Sandringham three times before, including last year, Spencer rode the 11-2 favourite quietly towards the back before getting active two furlongs out and forging clear of 22 rivals in the final 100 yards for a two-and-three-quarter-length success. It was as easy as that.

Before Royal Ascot, bookmakers had feared victory for Cracksman in the Prince of Wales’s Stakes. They dodged that one, only to be outgunned by Agrotera. Ladbrokes’ Nicola McGeady said: “She was our best-backed horse of the week. And it was our worst result of the week."

He was pipped to the top jockey post on the final day, but Frankie Dettori still enjoyed his joint-best Royal Ascot since he last topped the riders' leaderboard in 2004 in a stunning week that reaffirmed the love affair between the 47-year-old rider and the racing public.

Each of his wins was greeted with joy by the Royal Ascot crowd, but when Dettori landed his sixth Gold Cup on Stradivarius – in what was surely the week's most epic race – the reception he received was little short of euphoric.

The royal meeting atmosphere can be tame at times, at least compared to the bear pits of Cheltenham and Aintree, but Dettori lights a fire under this fixture year after year. 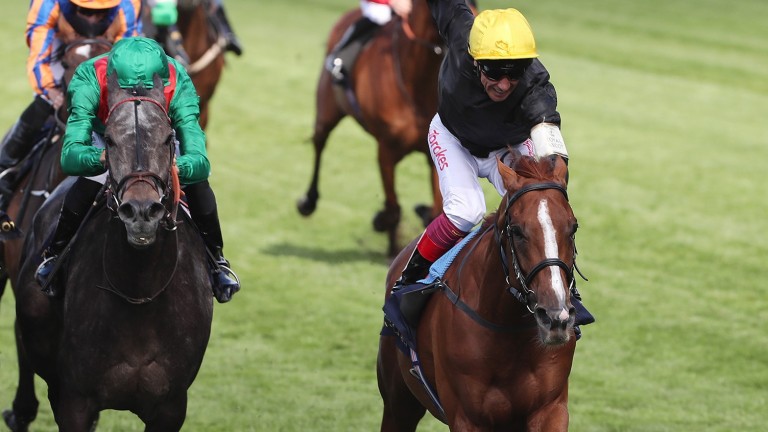 Frankie Dettori, who rides Ascot like a demon, delights his fans as Stradivarius wins the Gold Cup from Vazirabad
Caroline Norris (racingpost.com/photos)
Dettori is not just a brilliant jockey who rides Ascot like a demon, he is a showman without compare – whether kissing the hand of Duchess Meghan, laughing with the Queen or roaring his delight after one of his winners, he provided most of the week's most iconic images. Not to mention flying dismounts.

It's almost scary to think what will happen when Dettori retires, because there is no obvious candidate in the weighing room who can replicate his irresistible combination of ebullience, enthusiasm and energy, and who has the talent and personality to win over not just the racing public but the sporting public beyond.

Following victory on Stradivarius, his 60th win at Royal Ascot, Dettori joked to John Gosden that he would ride until he was 60. If that means a few more weeks like this, let's hope he actually does.