Celebrating rider rules out retirement despite injuring knee at Wincanton 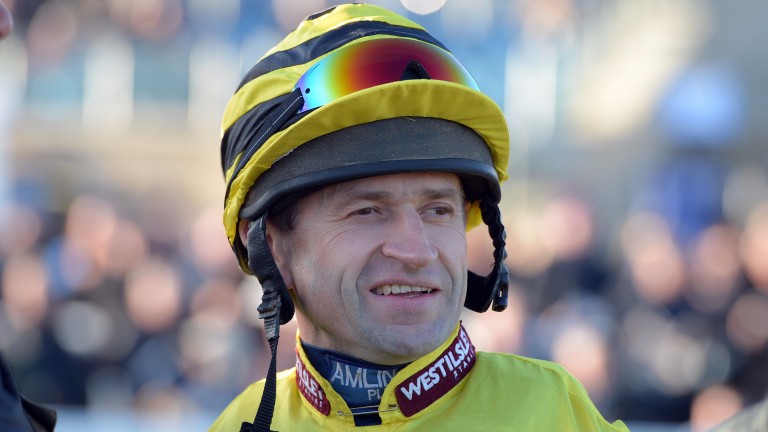 Andrew Thornton did not ride at Kempton on Tuesday due to a twisted knee but vows to be back in the saddle as soon as he is fit and to retire on his own terms.

Thornton suffered the injury after partnering his 1,000th winner at Wincanton on Boxing Day. The 44-year-old, who was overwhelmed by the number of congratulatory messages he received, insists the knee injury was a freak accident, not the result of an over-ambitious attempt at a Frankie Dettori-style flying dismount.

"I can assure you I wasn't attempting a flying dismount – I wouldn't be so daft at my age and my height," he said.

"I just got off Kentford Myth like you get off a horse and then twisted my knee as I turned to talk to owner-breeder Ian Bare. It was a complete freak but it's very sore and I'm in a lot of pain – my knee is much worse than my head!"

He added: "I don't know what the damage is, but I'm going to see Mike Foy at the Ridgeway. He's been seeing me since 1993 and has a file on me so thick he can barely get it in a drawer.

"He's actually on a week off but he's going to come in to see me. In the meantime I've got a pair of crutches from Oaksey House to help get myself around."

Looking ahead, Thornton said: "I'm absolutely planning to ride again. I've said that it was my last Boxing Day and that this is my last season but I intend to choose the day I stop and to finish on my terms.

"After 26 years – 30 years in all in racing – I couldn't just stop there and then. It's not as simple as that. I spoke to AP McCoy about it and he understands where I'm coming from.

"I might have been lucky though. Who knows what might have happened to me if I'd gone out and ridden in the next race at Wincanton in which there was carnage and nothing finished. Someone said somebody was looking out for me."

Thornton, who was especially pleased to bring up the 1,000 at "a proper National Hunt course" and on a homebred of Bare's trained by his long-time friend and supporter Seamus Mullins, received more than 200 texts and emails and answered every one.

He said: "I probably couldn't have slept anyway but I was up until about 1.45am answering messages individually. They came from all sorts of people, including Sally Alner, who has been such a supporter, and Gill Richardson, who was my first girlfriend from my days with 'WA' [Arthur Stephenson].

"I also had a photo sent from Ed Arkell at Fontwell. He's been doing a countdown on a wall there and sent a photo of all the lads in the weighing room raising a glass to me. It's amazing how many people you touch in a career as long as mine, and I really appreciate all the kind words."