Assessment of the winning performances at the weekend meetings 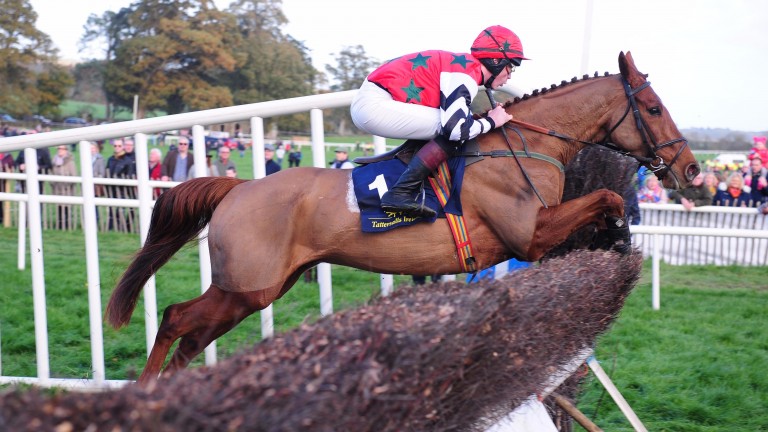 Cavite Beta and Neil Bashford make a big impression in the open at Dowth Hall
Healy Racing
1 of 1
By Eoghain Ward UPDATED 9:20AM, NOV 2 2017

Saturday, October 28
Daylight Katie (81+) picked up strongly once a gap opened in the home straight and by the line she was well in command to record a snug victory.
Lust For Glory (82+) was tightened up on the bend which put her on the back foot in fourth. Her pace allowed her to regain the lost ground and she won going away. She looks an ideal sort for a mares’ bumper.
Getaway Trump (92+) was ridden patiently in a slowly run race. Once sent to the front, he had too many gears for his rivals. He will likely thrive over shorter trips on the track.
Danny Kirwan (96+) produced the star performance of the season so far in a breath­taking display. This is one of the most impressive performances for some time as Jamie Codd never had to ask him a question to ease clear of his rivals.
Defacto Lady (77+) was done no favours by a faller two out but had plenty in the tank to reel in the long-time leader.
Duhallow Tornado (88+) was impeded badly on the bend after the third-last and dropped to sixth under pressure. Success looked unlikely at this point however, to his credit, he picked up strongly and although aided by the final-fence departure of Ballyegan Warrior (89x), stayed on all the way to the line.
Chapter Two (96+) won in a procession after her main rival, Presentingprincess, departed at the first.
Braize (86+) had picked up experience on the track and he put that to good use by making all in a casualty-stricken race.

Saturday, October 28
Weakfield (91+) was able to take advantage of crucial errors by fellow newcomer Brace Yourself (90+) at the final two fences. Both are future track winners.
Shumaker (90+) gained due compensation for a costly final-fence fall here last spring with a comprehensive victory over race-proven rivals. A return to the track should be rewarded.
Absainte (77+) was not at her best as she was all out to overcome a bad mistake at the third-last to get her head in front. She is capable of following up against fellow point winners.
Sizing Coal (107+) was pushed all the way to victory by Sambremont (106+) in a thrilling contest. The first three should have further success.
One Cool Clarkson (94+) can be considered a fortunate winner as he looked destined for second until the departure of Captain CJ (0+) at the second-last. Tougher tests await in open company for the winner.
Ballyhowne (85+) had race-fitness on his side against a field with several horses returning from long lay-offs. Given a well-timed ride, he was produced late for a decisive attack on the leader.

Sunday, October 29
Good Man Jim (94+) made all, with a significant mistake at the fourth-last not enough to check his momentum in a dominant performance. He is destined for big things and this was another smart four-year-old winner from this weekend.
Double You Be (88+) made a winning return in a modest race by five-year-old standards. Nonetheless, he looks to have improved from last season.
Cavite Beta (108+) was aided by a near-perfect round of jumping to mark himself as an early contender for champion point-to-point honours.
Larkfield Lass (76+) made it 17th-time lucky as she ran out a convincing winner of a race lacking depth.
Star Wizard (85+) was not suited by the slow gallop as he was all out to win. He will be seen to better effect in a strongly run race and can make the step up to winners’ company.
The petrol light was starting to flash for Canadian Steel (92+) as he began to tire in the closing stages. He just had enough of an advantage to hold off De Name Evades Me (91+), who was unlucky to make a crucial penultimate-fence error.