Cavalier springs surprise to give Moore his biggest win 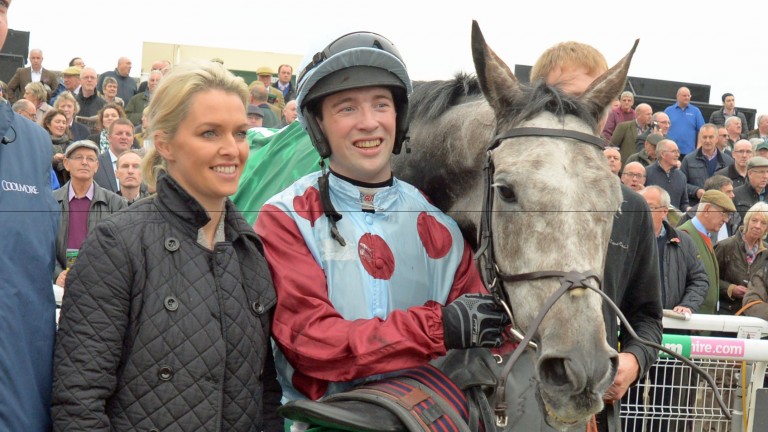 Jonathan Moore with trainer Rebecca Curtis and Irish Cavalier after the jockey's biggest career success in the Charlie Hall Chase at Wetherby
1 of 1
By Stuart Riley 5:48PM, OCT 29 2016

Irish Cavalier is the horse of young jockey Jonathan Moore's career. At least for now.

Victory on the seven-year-old at the Punchestown festival resulted in a job offer from Rebecca Curtis. Taking that job meant the 22-year-old had his first ride at Grade 2 level at Wetherby, and in guiding the 16-1 shot to an unlikely victory at the expense of seasoned warriors Menorah and Cue Card he not only cemented himself in his new position but served more notice of his talent.

Not many conditionals get the leg up in Graded races owing to their inability to claim, but Curtis's faith in Moore was handsomely repaid as he teased, kidded, nurdled, cajoled, nudged and then lifted his mount home.

For much of the race it looked Cue Card's for the taking. Last season's three-time Grade 1 winner jumped superbly, was sent on in the back straight and turning for home Paddy Brennan looked to have his rivals where he wanted them – in his wake and under pressure.

But as Brennan wound things up on the 8-11 favourite, Irish Cavalier would not go away. Brennan had Cue Card going flat out and yet his pursuer remained.

Then, between the fourth and third last, the unthinkable happened and Cue Card was headed. Moore sent his mount on but he was never quite able to put the race to bed.

The last two winners of the Charlie Hall simply would not give up and, as Irish Cavalier began to paddle they closed in one of those weary, tired finishes that are as much a test of heart as legs and lungs.

If Irish Cavalier had more heart and better lungs and legs than his rivals on the day, Moore brought the brains, and he punched the air as he crossed the line for just the 50th – and by far the biggest – win of a career that looks full of promise.

"It's days like this you dream about and it was the chance to be able to ride horses like him that I came over for," said Moore. "I really asked him up at the fourth-last and he's so genuine he came up for me. And he did that again at the third-last."

Explaining the background to the burgeoning connection, Curtis said: "Jonathan rode At Fishers Cross at Aintree and rode him well. Then he partnered this horse to win at Punchestown and I was impressed with his riding, so I offered him the job." 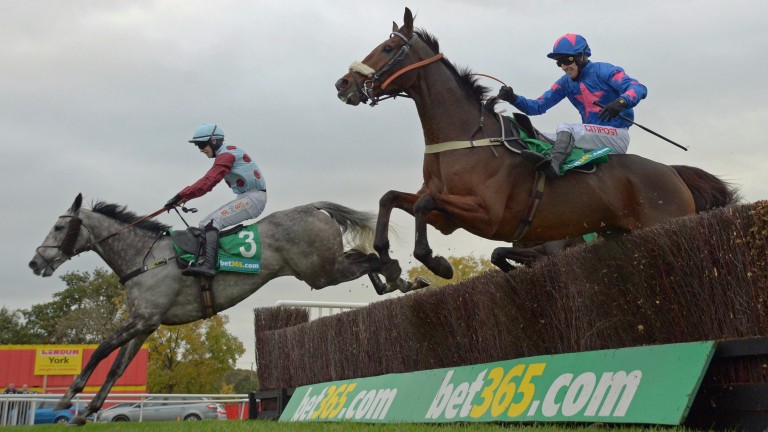 Jonathan Moore is confident of confirming superiority over Cue Card in the Betfair Chase aboard Irish Cavalier (left)
On Irish Cavalier she added: "We fancied him to run well, although we we didn't necessarily think he'd beat Cue Card and we weren't certain he'd stay three miles, but he clearly did.

"Apart from a couple of blips when my horses weren't right last season he was really progressive and ended up winning a Punchestown handicap with top weight."

Curtis could take a similar route to Cue Card last season, with the Betfair Chase on the agenda.

"I'd think we'll go for the top staying chases now, possibly starting with the Betfair," she said.

"He takes his racing well, in fact he thrives on it. He ran twice in four days at Punchestown last year and ran better on the second occasion, and last year he ran at Cheltenham, Aintree and Punchestown and ended up winning at Punchestown."

Winner had a fitness edge

Irish Cavalier had been a well-beaten fifth on his reappearance 20 days earlier, but did have that fitness edge over Menorah and Cue Card, whose connections will similarly be hoping and expecting for improvement next time.

Philip Hobbs's stalwart Menorah, who won this in 2014 and is still going strong two months shy of turning 12, was gallant in defeat.

He never quite looked like winning but was always close enough so he could not be ruled out, and by the line he had the gap down to just three-quarters of a length.

Owner Grahame Whateley said: "I'm very proud of him and I'm a bit emotional about his run. It's a pity they watered the ground down the far side as it was a touch too soft for him. I expect we'll find a race in December for him and then put him away until the spring."

FIRST PUBLISHED 3:49PM, OCT 29 2016
It's days like this you dream about and it was the chance to be able to ride horses like him that I came over for