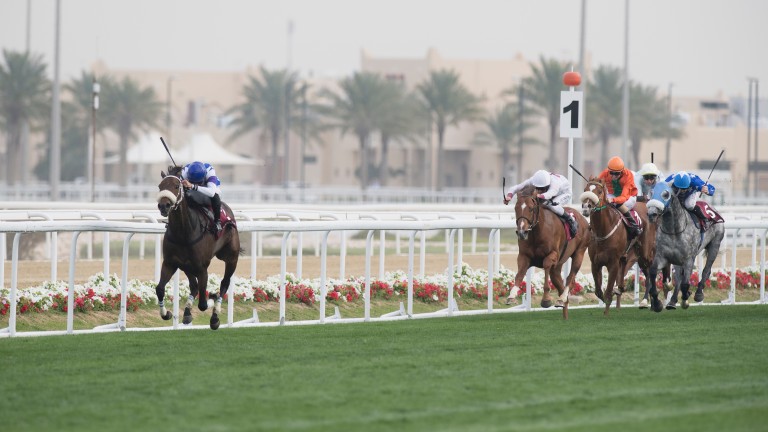 The $1 million HH The Emir's Trophy, a local Group 1 that is the thoroughbred highlight of Qatar's big three-day meeting, produced a shock winner from Bahrain with a fascinating history.

Outsider Chopin, who was not for catching when sent to the front a long way out by jockey Alberto Sanna, ran in Ruler Of The World's Derby in 2013, when sent off at 12-1 for German trainer Andreas Wohler.

Owned then by Qatar Racing, he remained winless in three further starts for Wohler before being sent to Ger Lyons in Ireland, where he suffered four further defeats, lowering his mark by 17lb.

He was sold at Tatts Autumn Horses in Training Sale in 2015 for just £9,000 to Maher Ebrahim Lutfalla, a dressage rider for whom he was a first venture in ownership.

His owner said afterwards that "all of Bahrain loves this horse", who will now be targeted at the Dubai World Cup.

In the other $1m race of the day, the HH The Emir's Sword for purebred arabians, Al Shaqab's Al Mourtajez was foiled in his bid for a £1m triple crown bonus – following the first two legs at Goodwood and Chantilly – by the Julian Smart-trained Ebraz.

Cries of team tactics had followed Al Mourtajez's defeat in the race last year at the hands of the Smart-trained Gazwan but there could be no complaints this time around as Al Mourtajez was sent into the lead but outstayed by his younger rival, who was in receipt of a 6kg weight allowance.

Smart said a triple crown bid would now be on the cards for his four-year-old, who he described as a super star.

FIRST PUBLISHED 6:19PM, FEB 25 2017
He was sold at Tatts Autumn Horses in Training Sale in 2015 for just £9,000 to Maher Ebrahim Lutfalla, a dressage rider for whom he was a first venture in ownership