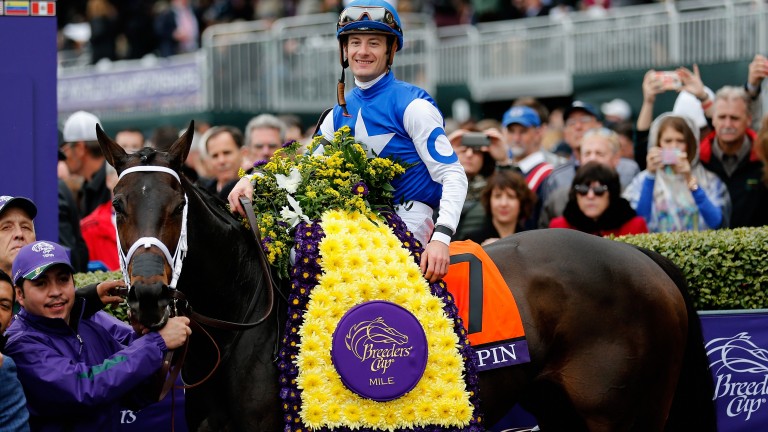 Tepin: bidding to win the Breeders' Cup Mile for the second year in succession
Getty Images/Rob Carr
1 of 1
By Tom Kerr at Santa Anita 6:00PM, NOV 4 2016

Tepin is no stranger to European audiences after her Queen Anne win this summer but she comes into this contest off the back of a first defeat in nine that highlighted a rare chink in her armour.

The Royal Ascot winner was sent off long odds-on for a mile Grade 1 at Keeneland and sat off a furious pace set by front-runner Photo Call. However, that rival was left with an unassailable lead as she entered the straight – ultimately holding on by almost three lengths from the onrushing Tepin.

Trainer Mark Casse said: "I think she ran her race and I'm not sure anyone would have beaten Photo Call that day. We just have to hope the same Photo Call doesn't turn up again, or we may be in trouble.

"Tepin's great, she's happy, she's wild. She likes going different places and travels better than the rest of us. She's got a great post in eight. She's very versatile. We'd have liked her to have won last time, but after Royal Ascot, this was our main objective."

Tepin won this race by more than two lengths last year and leads the betting with most bookmakers in what looks a vintage renewal of the race.

"It seems to me this is one heck of a Mile," Casse said. "Of course whenever you're in it you think it's pretty tough. I think this is an exceptional Mile. She's doing extremely well, however, and we should have no excuses."

FIRST PUBLISHED 6:00PM, NOV 4 2016
We just have to hope the same Photo Call doesn't turn up again, or we may be in trouble