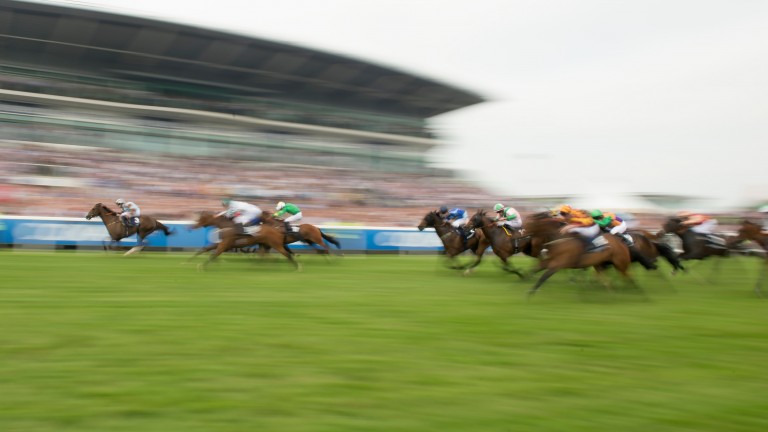 Runners speed past the stands in the Investec Dash, with Caspian Prince (left) coming out on top
Edward Whitaker
1 of 1
By Peter Scargill 4:33PM, MAY 29 2017

Caspian Prince will bid for a remarkable treble at Epsom on Saturday, with the dual winner attempting to capture the Investec Dash for a third different trainer.

The eight-year-old, owned throughout by Stephen Louch, won the race in 2014 for Tony Carroll and Adam Kirby and again last year for Dean Ivory and Robert Winston.

Since his second Dash victory, Caspian Prince has left Ivory for David Loughnane, transferred to Roger Fell, for whom he won a Listed contest at Dundalk, and then moved a third time to Tony Coyle.

Blessed with electric speed, particularly early in races, Caspian Prince is well suited by Epsom’s downhill five furlongs and Coyle said: “He ran at York last week and has come out of the race really well.

"He’s won the race twice so we know he likes it there and we know what he needs to do to win. He’s a sprinter and not a complicated horse to train at all.

“The draw is going to be key; both years he's won he's been drawn in a high stall. He has won three times in four starts there as well.”

Coyle added: “His owner called up and asked whether we could take him and he’s moved a few up here to us, which is great. It’s brilliant to have a horse like him going for a race like the Dash and it’s a real boost to the yard.”

Caspian Prince is a 14-1 chance to complete the Dash hat-trick, with another former winner Duke Of Firenze favourite at 8-1, just ahead of El Astronaute. The trio are among 30 confirmations for Saturday’s contest.

FIRST PUBLISHED 4:30PM, MAY 29 2017
It’s brilliant to have a horse like him going for a race like the Dash and it’s a real boost to the yard