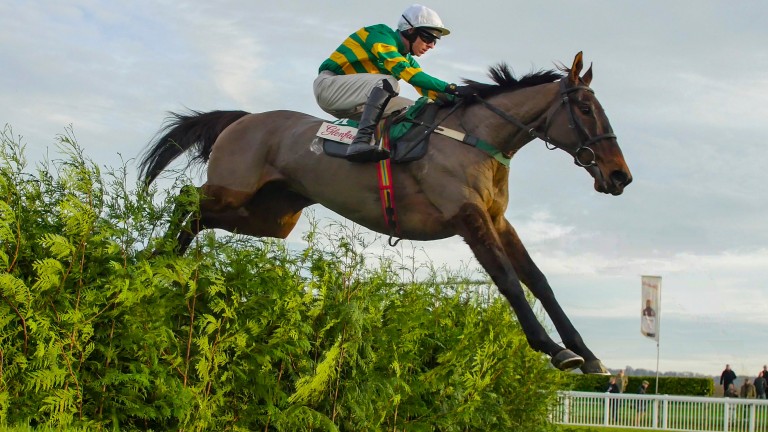 Cantlow: looks to be another winning favourite of the Cross Country chase
Mark Cranham
1 of 1
By Richard Birch 4:54PM, JAN 27 2017

Enda Bolger, who has won this race three times since 2007, would appear to hold strong claims once again with Cantlow likely to prove popular in the market.

The 12-year-old, winner of his last two starts including over course and distance last month, is clearly in great heart.

Best of the British trio could prove to be the Paul Nicholls-trained Rocky Creek who could be just the type to enjoy a new lease of life at this particular discipline. He schooled well under Sam Twiston-Davies over the course on Wednesday.

Four of the last seven runnings of this race have been won by the favourite.

Cause Of Causes needs to bounce back

Few will forget the manner in which Cause Of Causes stormed up the famous Cheltenham hill to land a major gamble in the Fulke Walwyn Kim Muir last season.

However, the nine-year-old has been well below that form since, including when pulled up behind Vicente in the Scottish Grand National at Ayr, and needs to be rejuvenated by the return to Prestbury Park.

Martin Keighley, trainer of Any Currency
He seems in great form. He schooled over the course on Monday and jumped very nicely. We’re focusing on the race at the Festival – which is level weights rather than a handicap – but I still think he’ll run a massive race on Saturday.

Gordon Elliott, trainer of Cause Of Causes
It will be a new experience for him. He’s in good form and we’re hoping he adapts well to the fences.

Enda Bolger, trainer of Cantlow and Auvergnat
Cantlow won well over the course last time. He’s in good order and we’re hoping for another big run. Auvergnat finished third behind Cantlow in the Risk Of Thunder and will be racing over the course for the first time. We’re hoping he might pick up some prize-money.

Paul Nicholls, trainer of Rocky Creek
He is a bit of an in-and-out performer. He won well two runs ago over three miles five which suited him well. Three miles was too sharp last time. He got headed and didn’t really want to know. He’s been hunting and schooled over the course earlier in the week. It might just brighten him up. He is capable of running well and something different might appeal.

Richard Hobson, trainer of Valadom
Valadom has got the experience round there, and we know he stays three miles really well. He’s that little bit stronger now and should get the trip. The horse has been ever so well since his run over hurdles at Catterick at the start of the month. I’m hopeful.

FIRST PUBLISHED 6:00PM, JAN 27 2017
He won well over the course last time. He's in good order and we're hoping for another big run