Can the real Frosted stand up and deliver on biggest stage? 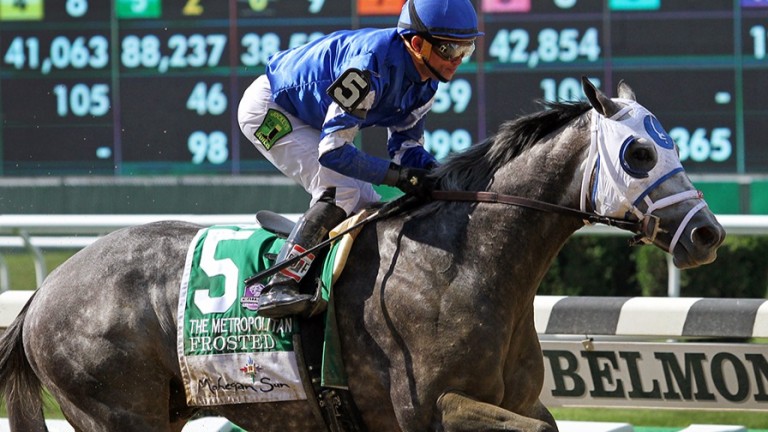 While always capable of a high level of form on his day, Godolphin's US flagship horse Frosted has often seemed to promise more than he delivered.

Witness, for example, the Dubai World Cup, where the grey son of Tapit was well fancied to upset California Chrome but faded badly in the closing stages. Next time, though, the Kiaran McLaughlin-trained colt delivered in style with a stunning display in the Met Mile, in which he annihilated Grade 1 opponents to win going away by a record margin of 14 and a half lengths.

"It's the best performance that I've ever seen almost, much less be the trainer," McLaughlin said. "It was just a 'wow' race. For him to be a length in front at the quarter pole and win by 14 drawing off is pretty crazy."

After the Met Mile, Frosted also did what he had never managed before, following up with another comfortable success at Saratoga in the Whitney, only to produce another slightly downbeat effort when third – albeit by only a neck – in the Woodward.

"We were the best that day in the Woodward, but we went 40 feet further and gave up weight," said McLaughlin. "We should be three-for-three this year but we're happy with the horse."

Such was Frosted's evident fondness for the mile distance that Friday's Dirt Mile was seriously considered as a target before the decision was made to take the braver option; Sheikh Mohammed himself was reportedly involved in the choice.

"We're not sure which Frosted is going to show up," admitted McLaughlin. "We hope it's the one from the Met Mile."

Pros Absolutely stunning in the Met Mile with a frighteningly dominant display that produced the highest Beyer speed figure of the entire year and followed up with another Grade 1 success at Saratoga; runs well fresh and comes in off a two-month break

Cons Has never won at a mile and a quarter – connections were eyeing the Dirt Mile – and New York-based colt also cedes home-court advantage to his main Californian-based rivals; can look a bit soft if things don't go his way

FIRST PUBLISHED 6:00PM, NOV 4 2016
For him to be a length in front at the quarter pole and win by 14 drawing off is pretty crazy