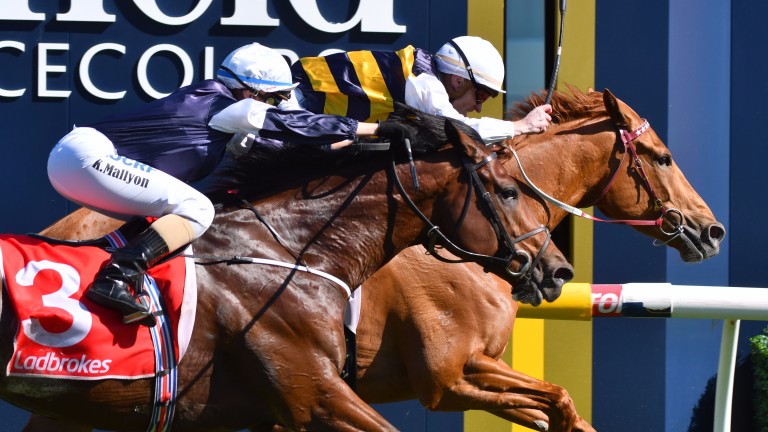 Another Ballydoyle blockbuster could be about to premiere in Caulfield, so set your alarm clock, pick up some popcorn and get ready to see if Johannes Vermeer can become the first Irish winner of the A$3.15 million (£1.885m/€2.096m) event.

The four-year-old also has the power to hand Aidan O'Brien a 25th Group 1 win of 2017 and, in the process, equal Bobby Frankel's record of top-tier triumphs. No pressure then, Johannes.

The son of Galileo shot to the summit of the Caulfield Cup market following his eyecatching second to Gailo Chop in the Ladbrokes Stakes last Saturday and the life-threatening injury to ante-post Japanese favourite Admire Deus.

Ben Melham will be having his first ride for O'Brien and is excited about the prospect of having a helping hand in the trainer's world record attempt.

Melham said: "Johannes Vermeer ran a super race on Saturday and I think he's going to be very hard to beat. He looks to have every attribute you need to win the race. He's got good gate speed, he relaxes well and he's got a really good turn of foot to get himself out of any trouble."

TJ Comerford, travelling head lad for O'Brien, said: "Johannes Vermeer is in great form. The jockey never knocked him about on Saturday and he came out of the race so, so well. It was actually like a piece of work for him."

Can Bowman work his magic on Marmelo?

Winx can wait. Hugh Bowman has other business to look after first, beginning with the Hughie Morrison-trained Marmelo who claimed the notable scalp of leading Melbourne Cup fancy Red Cardinal on his most recent outing in the Group 2 Prix Kergorlay at Deauville.

That form has been franked since by the runner-up Desert Skyline who trumped Thomas Hobson in the Doncaster Cup, but Bowman is concerned by the shorter trip and feels that we may not see Marmelo's magic powers until he arrives at Flemington for the Melbourne Cup.

Bowman said: "I had a pretty firm gallop with him last Friday. It did its job and stimulated him. He was much more on the bridle when I sat on him on Tuesday. He was more alert and aware of what he was up to. He was very comfortable. He's so much more alert now than the first couple of days I rode him.

"I expect him to run very well, but it's a long time since he ran over a trip as short as this. He's here for the Melbourne Cup, and the Caulfield Cup is a good stepping stone towards that."

The draw demons have come back to haunt Wicklow Brave. He was turfed out to the car park for last year's Melbourne Cup when coming out of stall 24 of 24 and he has fared only marginally better for his next Australian mission – stall 16 of 17.

The eight-year-old is now a Grade 1-winning hurdler and was last seen finishing fourth in the Irish St Leger, a race he won in 2016. Wicklow Brave may be a big price but Willie Mullins' assistant David Casey is not ruling out a big run.

"He looks super and his work has been good," Casey said. "We're under no illusions and we know the Caulfield Cup is going to be a very difficult race, but we're up for the challenge and hopefully he'll run very well..

"He still has a huge appetite despite all he's done. He's done it over hurdles and on the Flat, he's a Grade 1 and Group 1 winner. His last run behind Order Of St George was a really good one and I think if he can replicate that he'll run a very big race."

Archie Alexander, son of former Malton-based trainer Hamish, has made a big splash since his arrival in Australia and the 31-year-old now has his sights set on a first Group 1 victory with Lord Fandango.

The improving four-year-old warmed up for his biggest test to date by beating Wall Of Fire in the Group 2 Herbert Power Stakes over course and distance last Saturday and his trainer thinks there may be more to come.

Alexander said: "Lord Fandango was an impressive winner of his last race. He has a low weight, is ridden by someone who knows him well in Ben Allen, has a good draw, will love the ground, is a course-and-distance winner, is improving fast and we might not have got to the bottom of him yet. He ticks a lot of boxes.

"It's an open race and a lot of them are coming in with question marks after their last run."

Who will spearhead the home challenge?

Baker said: "I'm very happy with Bonneval. She is a dual Oaks winner, she gets the trip and I'm happy to have Kerrin [McEvoy] on board. She still ran the fastest last 800 metres on Saturday. Hopefully we will get a bit of rain which will slow things down a bit."

"Jon Snow is very honest and I do think he has a chance."

For a brief moment on Tuesday it looked like Craig Williams would have no ride in the race after Admire Deus picked up a nasty tendon injury, but he was swiftly switched to Amelie's Star, with youngster Michael Dee stepping aside.

If you were interested in this, why not can catch up with David Jennings' Australian Odyssey:

Glorious Guineas day at Caulfield with something for everyone

FIRST PUBLISHED 6:00PM, OCT 19 2017
Johannes Vermeer ran a super race on Saturday and I think he's going to be very hard to beat