Can Iridessa or Trethias end the wait for home trainers in the Irish Oaks? 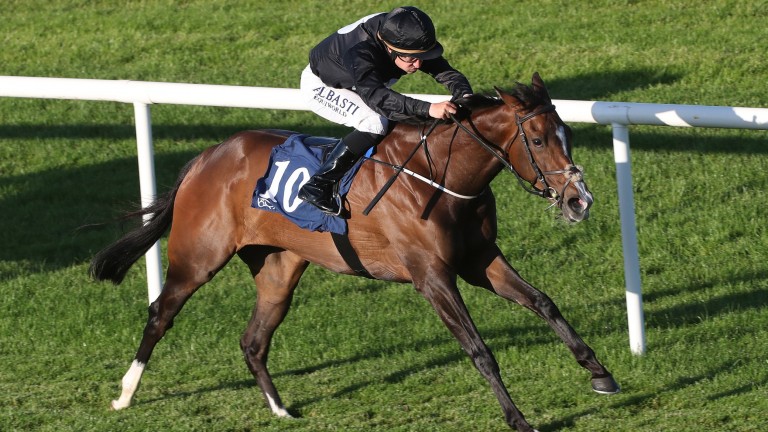 No home trainer other than Aidan O'Brien has managed to land the Kerrygold Irish Oaks since the legendary Paddy Mullins plundered the prize with Vintage Tipple in 2003.

In the intervening years, O'Brien has won the Classic five times, with the prize going to British and French-trained horses on ten occasions, most recently with Enable and Sea Of Class.

Could 2019 be the year an Irish trainer who does not reside in Ballydoyle claim the fillies' Classic?

The home challenge in 2019 without Aidan O'Brien

Iridessa (Joseph O'Brien)
Prospects: Appeared to relish the step up to 1m2f when beating her elders in the Pretty Polly and looks to have a favourite's chance.

Trethias (Jessica Harrington)
Prospects: Beat Pink Dogwood emphatically in a Curragh maiden at two but has taken time to come to hand at three. Much improved effort in the Oaks Trial at Naas last time and looks a live outsider.

Search For A Song (Dermot Weld)
Prospects: A sister to Falcon Eight and closely-related to Free Eagle so the step up to 1m4f should be right up her street. Hard to envisage her reversing Naas Oaks Trial form with Trethias.

Operatic Export (Jim Bolger)
Prospects: Only rated 83 and would be a shock winner.

Joseph O'Brien would appear the man best placed to end the drought with Pretty Polly winner Iridessa, who is a general 5-2 for the Classic.

She renews rivalry with the Aidan O'Brien-trained Pink Dogwood, who she finished three and a half lengths clear of at the Curragh last time.

However, Jessica Harrington has her eyes on the prize with Trethias, whose impressive Naas Oaks Trial victory has given her 72-year-old trainer a real chance of a second Classic just one year after Alpha Centauri won the Irish 1,000 Guineas.

"We've always thought a lot of Trethias and you're finally getting to see what we all hoped she could do," said Harrington.

"She's getting stronger all the time and she put it all together at Naas. I was absolutely delighted. Her first run of the season at Navan was a non-event with the way things panned out and her Leopardstown run was only over a mile which wasn't far enough.

"When she stepped back up to a mile and quarter at Naas last time she was able to show what she is made of. It's been a slow process this season but she's making up for lost time.

"She's a lovely filly and is bred to improve as she's from the same family as Dar Re Mi. We like her. I don't know whether she can win or not and I would be delighted if she places."

Harrington's team could not be in better form as she has sent out 12 winners in the last fortnight, including an across-the-card double at Killarney and Fairyhouse on Wednesday evening.

One of her brightest prospects this season is the unbeaten Leo De Fury, who has won his two starts by five lengths at the Curragh and Navan, and his most recent success earned him an RPR of 100.

"We're going to take baby steps with him and we don't want to rush him into anything big. I haven't had him long but he's always done everything nicely. I'm on the look out for a three-year-old only race over a mile and a quarter or a mile and a half. We'll take it one step at a time. We like him," said Harrington.

FIRST PUBLISHED 1:10PM, JUL 18 2019
She's getting stronger all the time and she put it all together at Naas

'We ran the wrong horse' - Jessica Harrington apologises after Galway mix-up Is Snowfall the best filly O'Brien has trained? It's now a question worth asking Can Breeders' Cup Mile winner Order Of Australia handle this tricky speed test? Best could yet be to come from Pretty Polly fourth Insinuendo Would you side with Snowfall or Love if they go head-to-head? Sublime Snowfall records biggest winning margin in Irish Oaks for over 100 years