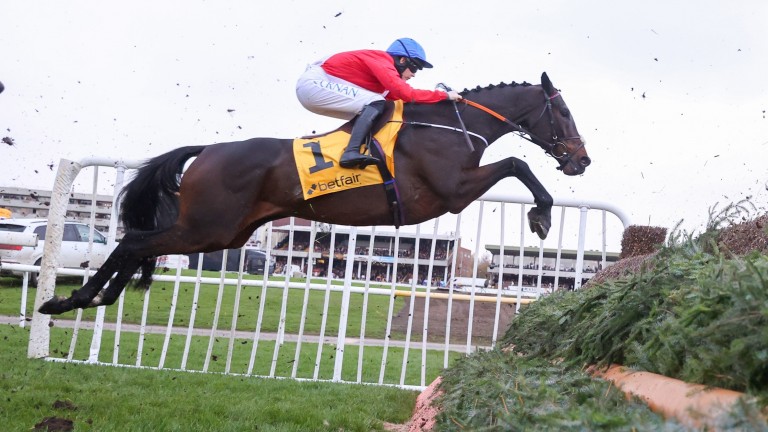 A Plus Tard: 22-length winner of the Betfair Chase at Haydock
John Grossick (racingpost.com/photos)
1 of 1
By Racing Post staff UPDATED 8:13AM, NOV 22 2021

Asking whether A Plus Tard can win the Gold Cup is like asking whether Chelsea can win the Premier League – Saturday's victory suggests they have the ability but whether they are worth backing at current odds is a different question.

His landing of the Betfair Chase by 22 lengths at Haydock was akin to Thomas Tuchel's boys beating Leicester 3-0 at the King Power Stadium: success augured well for next spring but stiffer tests lie ahead.

Even when the ground is not bottomless, the Betfair Chase can be an unreliable guide to future events and Gold Cup-winning stablemate Minella Indo – now a 6-1 chance to his 4-1 – showed enough when seemingly in need of the run at Down Royal last month to hint he may again be the one to beat at Cheltenham in March.
David Carr, racing writer of the year

'Did he beat any likely Gold Cup protagonists?'

A Plus Tard could not have been more impressive in routing the Betfair Chase on his return, but did he beat any likely Gold Cup protagonists?

The answer is probably no, so he will certainly face a stiffer test of his credentials when heading to Leopardstown for the Savills Chase over Christmas.

He is a fantastic horse and has many qualities, but at the prices, I would prefer to take the 6-1 about last season's scorer Minella Indo. There is no denying who will be happiest at this early stage though – a certain Henry de Bromhead!
Jack Haynes, reporter

'Only Royale Pagaille ran anything near his best'

The Betfair Chase is a unique race – the last horse to go and win it and the Gold Cup in the same season was Kauto Star in 2006-07 – and for all A Plus Tard was a serene winner, I can't help but think he was flattered in a race where arguably only Royale Pagaille ran anything near his best.

A Plus Tard is at his best left-handed and when he can utilise his speed and that's exactly what happened at Haydock. The race fell apart around him.

The 4-1 available is far too short for my liking and I'd much prefer the 6-1 about his stablemate and last season's winner Minella Indo. We may not be in a vintage era of staying chasers so after Al Boum Photo's Gold Cup double we could be in for another.
Maddy Playle, journalist

FIRST PUBLISHED 4:47PM, NOV 20 2021
He is a fantastic horse and has many qualities, but at the prices, I would prefer to take the 6-1 about last season's scorer Minella Indo