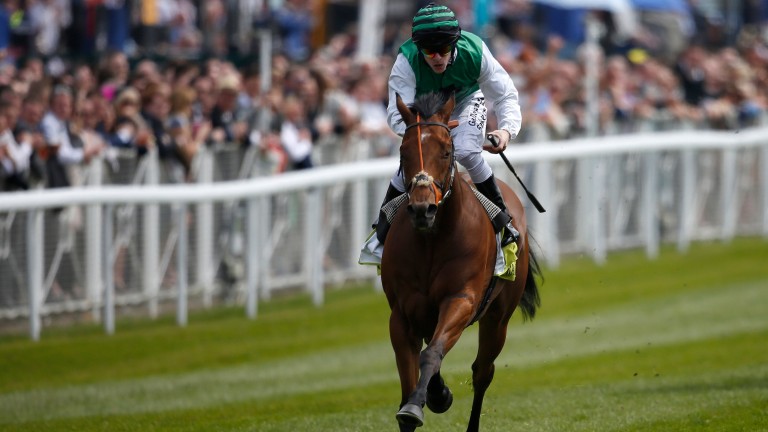 Hillbilly Boy has won three times and finished second in four starts at Chester
Getty Images
1 of 1
By Andrew Dietz 1:48PM, MAY 12 2017

Tom Dascombe saddled a treble at this corresponding fixture last year and the trainer will be looking to start the day on the right note with either Hillbilly Boy or Calder Prince.

With an impressive record of three wins – including in this race 12 months ago – and a second in four starts at the course, Hillbilly Boy could be the one with stable jockey Richard Kingscote booked to ride, but he and Calder Prince will need to overcome high draws.

Placed in stall two, the Sir Michael Stoute-trained El Hayem has fared better and the lightly raced four-year-old might be open to further progress assuming he handles the drop back in trip at this sharp track.

Richard Fahey has won this race twice since 2009 and Rene Mathis looks the pick of his pair after the form of his Thirsk win last month was franked when runner-up Custom Cut landed the Group 3 Amethyst Stakes at Leopardstown on Sunday.

Five of the last seven winners were five-year-olds. Fuwairt, Grand Inquisitor and Call Out Loud fit that criterion this time.

Tom Dascombe, trainer of Hillbilly Boy and Calder Prince
Hillbilly Boy won a claimer and a Listed race at the track last year. He had a bit of a tough winter and hasn’t been exactly where I want him, but we’ve been getting there and he’d have a massive chance if we got a bit of rain. I was happy with Calder Prince’s first run back on turf last month when he finished fourth at Haydock. He’s come down another 2lb for that and is now 13lb below his peak last year, so he’s dangerously well handicapped if he returns to his best. He’s another who ideally needs some cut.

Richard Fahey, trainer of Rene Mathis and Gabrial's Kaka
Rene Mathis surprised me when winning at Thirsk last time. He’s in good form and a drop of rain would help. Gabrial’s Kaka ran a good race to finish second in this last year and is a regular at the course. He’d also like some rain.

James Eustace, trainer of Ice Slice
He’s got a good draw and is a course-and-distance winner. He ran well for a long way at Nottingham last time but understandably got tired as he needed it. Following his good campaign last year he’s on a high mark, but he’s a tough type and any rain would help.

Andrew Balding, trainer of Intransigent
He’s got some good course form and has been running well on the all-weather. We’ve freshened him up a little since Good Friday and he seems in good form.

Harry Herbert, racing manager to Al Shaqab Racing, owners of El Hayem
He ran a promising race at Newbury and just got a little tired. He’s done well physically from three to four and we’re hopeful there’ll be improvement to come throughout the season.

FIRST PUBLISHED 6:06PM, MAY 11 2017
He's dangerously well handicapped if he returns to his best