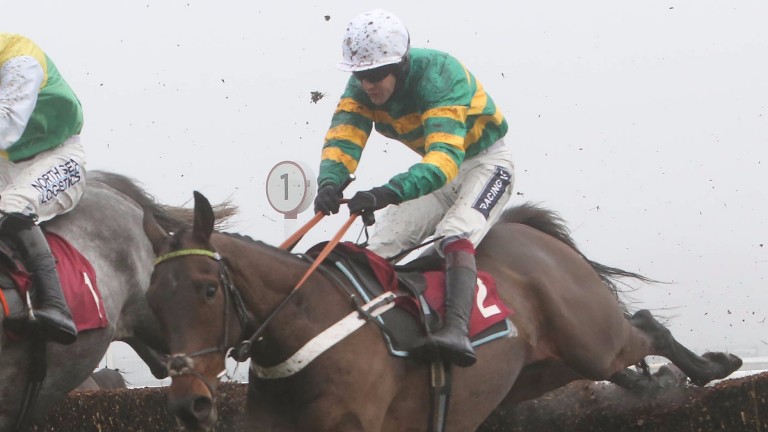 Buveur D'Air: back over hurdles as connections eye the Champion Hurdle
GROSSICK RACING PHOTOGRAPHY 0771
1 of 1
By Richard Birch 6:54PM, FEB 3 2017

Buveur D’Air, bound for the Stan James Champion Hurdle next month after connections decided to put his chasing career on hold, faces just three rivals in a race his trainer Nicky Henderson has won three times in recent years.

The JP McManus-owned six-year-old, as short as 5-1 for the first-day festival showpiece, finished third behind exciting stablemate Altior in the Supreme Novices’ Hurdle at Cheltenham last March, and is unbeaten in two races over fences this season.

Henderson, who plundered this Listed race with Afsoun (2008) and Binocular (2010 and 2011), said: “We’re bringing him back over hurdles and I like the idea. The Champion Hurdle is looking open this year, and he’s a very talented horse.

“I’m keen to give him a run over hurdles to see if he belongs in this game.”

Buveur D’Air, who boasts plenty of winning form on testing ground, is likely to be sent off odds-on favourite at around 2-5.

Irving, rated 9lb higher than Buveur D’Air on official ratings, fell on his latest start behind The New One, and has to concede 4lb to the red-hot favourite. He will sport a combination of a tongue tie and cheekpieces for the first time.

His trainer Paul Nicholls said: “Irving was a bit unlucky at Haydock – he just made a silly mistake. Otherwise he’s won the Fighting Fifth, will love the ground and the trip, and should go well. He has to give 4lb to Buveur D’Air which won’t be easy, but has to run somewhere.”

One horse guaranteed to relish the uphill climb at Sandown on testing ground is the Oliver Sherwood-trained Rayvin Black, twice a course and distance winner in the depths of winter.

“On the bare face of it he won’t beat Nicky’s horse,” Sherwood said. “Funny things can happen in racing, though. We know he loves Sandown and that he loves soft ground. It can rain all day as far as I am concerned – the softer the better.”

The 129-rated Hurry Henry, who will be fitted with a tongue tie for the first time, completes the four-strong field for trainer Brian Barr. He is sure to start a big-priced outsider, but will pick up over £1,000 in prize-money simply if he finishes fourth.

FIRST PUBLISHED 6:00PM, FEB 3 2017
We're bringing him back over hurdles and I like the idea