Business brisk as news of on-course shop closures sinks in 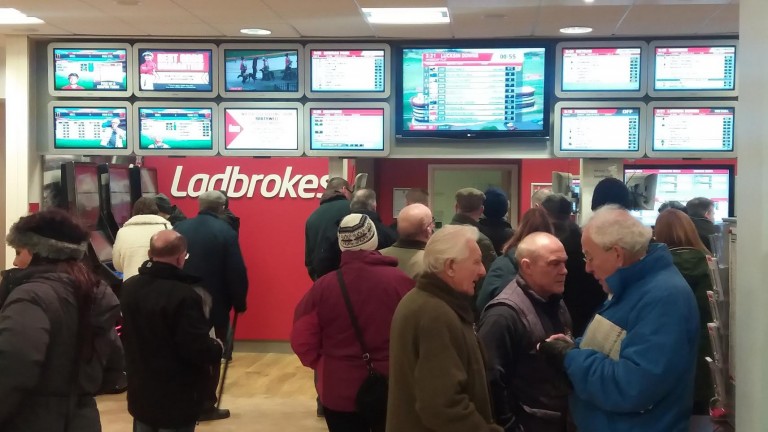 A busy day for Southwell's Ladbrokes shop, which has now ceased trading for the foreseeable future
Keith Melrose
1 of 1
By Keith Melrose 6:19PM, JAN 26 2017

It was bitterly cold at Southwell on Thursday as punters, bookmakers and staff took their allotted 24 hours to digest the news that Ladbrokes shops on six Arc tracks will be forced to close from Friday.

Business was brisk at the on-course Ladbrokes branch on what will, until further notice, be its last day of trading. The shop has one permanent member of staff and it is understood workers learned of the impending closure through the Racing Post's story.

Punter Trevor Mather, bemoaning he had backed the first three in the opener but not the Tricast, said: "I was told when I put my bets on that today was the last day they'd be open. I'm here for every meeting and it won't stop me coming, but I'm not sure what I'll do because I'm not keen on the Tote."

Peter Catchpole from Barnsley, who "does the odd forecast," said: "It won't affect me too much, it's the shop punters I feel for more because they're not getting any pictures at all."

Ladbrokes did not take their usual place among the eight course bookmakers, reportedly owing to illness rather than anything else, and those who did pitch up seemed nonplussed by the sudden news.

"We only read it in the Racing Post this morning," said Dave Smith. "Hopefully it'll all get resolved in the next few weeks, but if it runs on and on I don't know what effect it will have on our business.

"It might keep the more casual punters away, those who have their doubles and trebles on in the course shop. But I doubt it will affect the diehards, the members, etc."

He added: "We actually do all right here. In terms of midweek fixtures, from what I hear from the books elsewhere we possibly get the best of the all-weather tracks."

Doncaster-based Paul Johnson was also taken aback by the move. "There had been rumours the last day or two, but it's all come very suddenly," he said.

"It's all a bit of muscle-flexing from both sides. Everything's changing in terms of rights and we saw it a few years back with Turf TV. I hope it doesn't affect our business too much. It might put a few people off if they can't have a bet in the Ladbrokes and claim it back at their local shop another day."

Johnson did see some sort of opportunity for rails bookmakers amid the debris. "Once the shops are shut, we might well start doubling up with our pitches and having one dedicated to the away meetings."

The first meetings set to be affected by the closures are Doncaster and Lingfield on Friday.

FIRST PUBLISHED 5:52PM, JAN 26 2017
There had been rumours the last day or two, but it's all come very suddenly