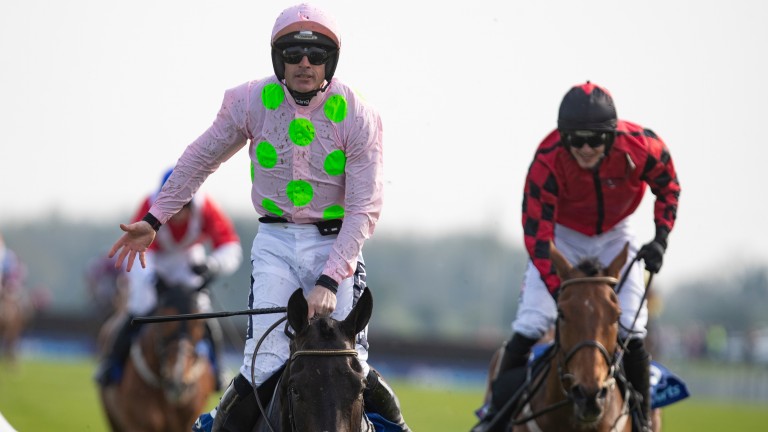 This is traditionally one of the best trials for the Grand National.

Hedgehunter did the double in 2005, Pleasant Company won it in 2017 before getting within a head of Aintree glory the following year, while 2019 winner Rathvinden was third to Tiger Roll six weeks later.

And Burrows Saint begins his road to Aintree in earnest. The 2019 Irish Grand National winner has been keeping himself fit over hurdles of late and this will be his first outing over fences since finishing third in the Drinmore in December of 2019. He has been allocated a mark of 156 – 10st 13lb – for the Randox Grand National and is disputing favouritism with Betfair and Paddy Power at 12-1.

He looks to have the ingredients for Aintree, too. He is not exposed over fences, having only eight starts, and there may well be more to come. When he landed the Irish Grand National off a mark of 144, his jumping was particularly impressive and stamina was certainly not in short supply.

Aintree has always been the aim, so it begs the question: will he be at concert pitch here? Perhaps not, but he might not have to be. The conditions of the race mean he receives 6lb from last year's winner Acapella Bourgeois, despite the fact he is officially rated 1lb superior to him. That should suffice.

Acapella Bourgeois arrives on the back of finishing a well-beaten fifth in the Thyestes on bottomless ground. He was sixth in it last year before beating Bellshill by 15 lengths here so ignore him at your peril.

The conditions of the race give Tout Est Permis every chance, but he has been woefully out of sorts of late and Noel Meade has altered his daily routine in an attempt to bring him back to life. If back to his best, he would have a big chance.

Similar comments apply to Anibale Fly, who has been off the track for 356 days. He chased home Al Boum Photo in the 2019 Cheltenham Gold Cup so an encouraging effort here could result in his Grand National odds being slashed. He is as big as 40-1 with William Hill.

The Long Mile has stamina questions to answer. He's been tried over 3m only once and that didn't go too well over hurdles.

Despite his recent form being a bit iffy over hurdles, Burrows Saint is the one with least questions to answer and should get the job done.

If you want more tips for Saturday's racing . . .

Saturday Sizzlers: 'I've had him on my radar all season' – find out who has Paul Kealy so excited

View from Ireland: 'His form looks very strong' – David Jennings is keen on a handicap debutant

Willie Mullins, trainer of Acapella Bourgeois and Burrows Saint
Burrows Saint has been a little disappointing over hurdles, but I'm hoping that a switch to fences and a return to the scene of his biggest triumph will spark him back into life. He seems in good form. Acapella Bourgeois also likes Fairyhouse, as you saw in this race last year when he won it impressively. He ran okay in the Thyestes, finishing fifth on very testing ground. He likes it here.

Tony Martin, trainer of Anibale Fly
He's been a long time away from the track but he's ready to start back now and seems to be in good form. He's in the National, but we will see how this goes first before making any decisions. Hopefully he will give a good account of himself.

Noel Meade, trainer of Tout Est Permis
I've changed his whole routine around and tried a few new things with him. Hopefully it works and he can show a bit more spark than he has been doing lately.

Petit Mouchoir could have big say

The rerouted Red Mills Trial Hurdle is a fascinating affair, with the evergreen Petit Mouchoir afforded a golden opportunity to gain a sixth win.

Now owned by Noel and Valerie Moran and trained by Gordon Elliott, Petit Mouchoir is the highest-rated runner in the race with a mark of 155 and actually gets weight from Jason The Militant and Sixshooter.

Elliott said: "He always seems to run his race and is a very good horse on his day. He's in good form at home."

Sixshooter is taking a dramatic drop in trip having tried three miles in the Galmoy Hurdle at Gowran Park last time, but Noel Meade is hoping he will cope with the speed test.

The trainer said: "I'm delighted the race has moved away from Gowran and I think Fairyhouse will suit him better. We didn't want to run him against Beacon Edge last Sunday so we've come here instead. Maybe the trip might be too short, I don't know, but he's in terrific form."

Darasso is also down in trip having finished third to Beacon Edge in the Boyne Hurdle over 2m5f at Navan on Sunday.

If you want more insight on Saturday's racing . . .

Members' Club: staying brigade all set to go the distance at Newcastle, Fairyhouse and Kempton

Members' Club: is there another Zarkandar hiding in the long grass? We assess the Kempton card

The Saturday Jury: 'I think he's got a brilliant chance' – our panellists preview the weekend (Members' Club)

1.50 Kempton: why an encounter with the brilliant Shishkin might help Tamaroc Du Mathan

2.25 Kempton: another juvenile star for King? Triumph clues on show with Tritonic in Adonis

3.15 Newcastle: 'He's in the form of his life' – Crosspark bidding for rare Eider Chase repeat

3.35 Kempton: does it pay to stick with the stayers or is speed the key to the Close Brothers?

Lingfield: Hollie Doyle out to land Winter Derby after coming out of self-isolation

FIRST PUBLISHED 6:00PM, FEB 26 2021
I'm hoping that a switch to fences and a return to the scene of his biggest triumph will spark him back into life