Burrows has Moulin in mind for Hungerford hero Massaat 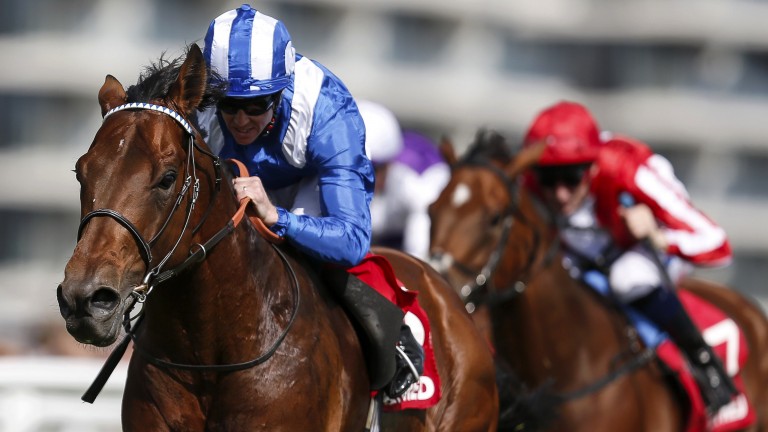 Massaat looks likely to head to Chantilly on Sunday where he will face Ribchester in the Qatar Prix du Moulin
Getty Images
1 of 1
By Scott Burton UPDATED 5:04PM, SEP 6 2017

Massaat was among ten names left in Sunday's Qatar Prix du Moulin at Chantilly as the range of potential runners for the two Group 1s on the Arc trials card was narrowed on Wednesday morning.

Hamdan Al Maktoum's son of Teofilo returned from more than a year on the sidelines to score in the Hungerford Stakes at Newbury last month and trainer Owen Burrows expects there to be sufficient ease in the ground to allow Massaat to take his place in the line-up.

"It's more than likely that we will come," said Burrows. "I had a chat with [racing manager] Angus Gold this morning and it looks as if the ground is going to be suitable. I have been pleased with the horse since the Hungerford."

Sheikh Hamdan could be doubly represented, with Jean-Claude Rouget having indicated earlier in the week that Taareef was an intended runner, while Richard Fahey has also declared that Ribchester will take his chance on Sunday.

The going is soft at Chantilly with the possibility of rain to come on Friday.

A total of 16 have been left in the Qatar Prix Vermeille, which is an important target in its own right but is also a race which has provided the Arc winner in four of the last nine years.

Yet to be tried over 1m4f, Winter is one of three Aidan O'Brien-trained entries remaining alongside Hydrangea and Seventh Heaven.

The penultimate declaration stage for the two Group 1s – as well as for recognised Arc trials the Prix Niel and the Prix Foy – will take place on Thursday morning.

What a boar - Chantilly comes under attack from unwelcome visitors

FIRST PUBLISHED 1:20PM, SEP 6 2017
I had a chat with Angus Gold this morning and it looks as if the ground is going to be suitable