Talk of the Tracks OFF THE MARK 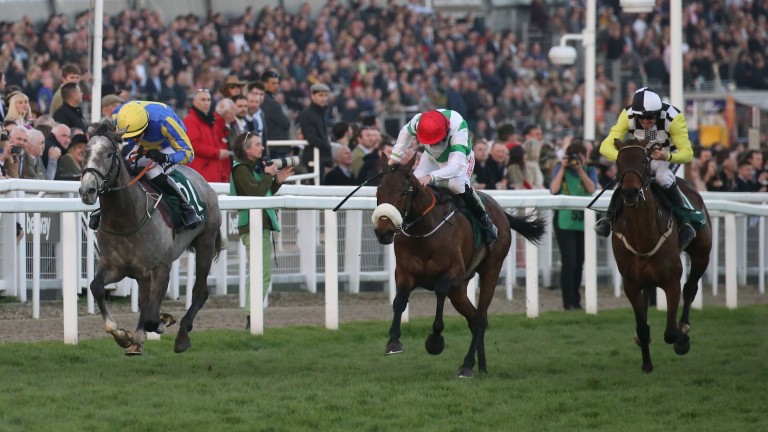 Last year's Champion Bumper winner Fayonagh made a bloodless start to life over jumps when she ran out a comfortable winner at odds of 2-13 in a maiden at Fairyhouse on Saturday.

Davy Russell employed tactics similar to those used when she won Punchestown's Champion Bumper, making virtually all on the Gordon Elliott-trained mare who jumped fluently, erring on the side of caution by giving the odd flight plenty of air.

The unfancied Rock Road sat prominently most of the way and proved a persistent challenge after the last, but Russell only had to nudge out Fayonagh to win by two lengths.

Elliott said: "Job done. Davy was delighted with the way she jumped. I don't think she could have done any more than she did. She is having a good blow afterwards and we know she will come on for it. What I loved about it was the way she winged the last two hurdles. That was great to see. I could not be happier."

He added: "The Grade 3 mares novice hurdle in early November is the plan now."

As to longer-term objectives, he said: "I am a big believer in winning what you can win so at the moment the mares race at Cheltenham would be the plan. You never know what is going to happen but that is where I would be going with her at this stage anyway."

Fayonagh was clipped by a few firms for the Dawn Run Mares' Novices' Hurdle at the Cheltenham Festival, but remained unchanged at 4-1 with Paddy Power.

The best live reports on racingpost.com

FIRST PUBLISHED 3:38PM, OCT 7 2017
I am a big believer in winning what you can win so at the moment the mares race at Cheltenham would be the plan