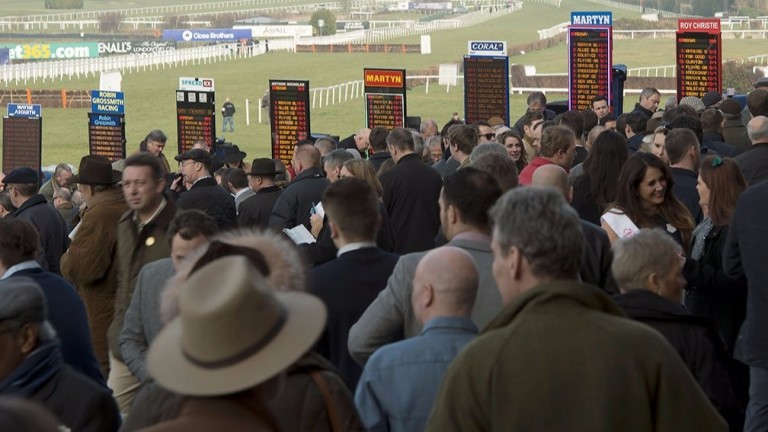 The feel-good factor provided by some stonking action on the track over Christmas continued on Thursday when it was revealed more spectators than ever before included a trip to the races as part of their festive celebrations.

Racecourse attendances in Britain reached an all-time high over the seven days, which started on Boxing Day, with crowds on course topping 200,000 for just the second time.

The previous record in that period had stood at 202,222 in 2011-12 but despite six fewer fixtures, 204,106 people pulled on their Christmas jumpers to see the likes of Thistlecrack, Yanworth and Native River win in the flesh at 29 British fixtures, providing horsemen with a timely tonic after a challenging 2016 for the industry.

The average attendance for the same seven days was also the highest on record at 7,038, beating the previous best of 6,809 in 2014-15, while 72,561 people burnt off their Christmas dinner with a trip to the races on Boxing Day, compared to 57,584 12 months ago, albeit when Wetherby was a casualty of the weather.

“We're delighted that more people than ever went racing over the Christmas period, illustrating that a day out at the races remains as popular as ever,” said Will Aitkenhead of the The Racecourse Association, the trade association for British racecourses.

He added: “Credit must go to the racecourse teams across the country who deliver a brilliant raceday experience regardless of the weather and we hope those first-time racegoers will return. This late boost to the attendances will bolster the overall numbers for 2016 which we expect to be around the six million mark.”

After a year that had not been plain sailing for the sport off the track, 2017 started with more awkward headlines for British racing with a Rule 4 controversy at Cheltenham.

However, an afternoon at the races proved a big-draw with spectators over Christmas with 21,164 watching Thistlecrack win the King George VI Chase at Kempton on December 26, the same day Wetherby and Wincanton welcomed crowds of more than 10,000.

The following afternoon 11,861 cheered home Native River in the Welsh Grand National at Chepstow, while despite some foul weather, more than 30,000 turned up at Cheltenham’s New Year’s Day fixture and a course record crowd of 6,406, almost 1,000 more than the previous year, enjoyed sunnier climes at Musselburgh.

“Over the past three years our New Year’s Day crowd has grown by about 20 per cent every year,” said Musselburgh general manager Bill Farnsworth. "This year it was a sell-out and has the potential to grow even more. The ITV advertising helped us and the weather was great.

"At the top end on racegoer-friendly days it does work but there’s two sides of it and let’s not forget that we need to make sure the pyramid has solid foundations, look after those tracks that race midweek and recognise the role they play but it’s very positive.”

FIRST PUBLISHED 3:25PM, JAN 5 2017
Credit must go to the racecourse teams across the country who deliver a brilliant raceday experience regardless of the weather and we hope those first-time racegoers will return