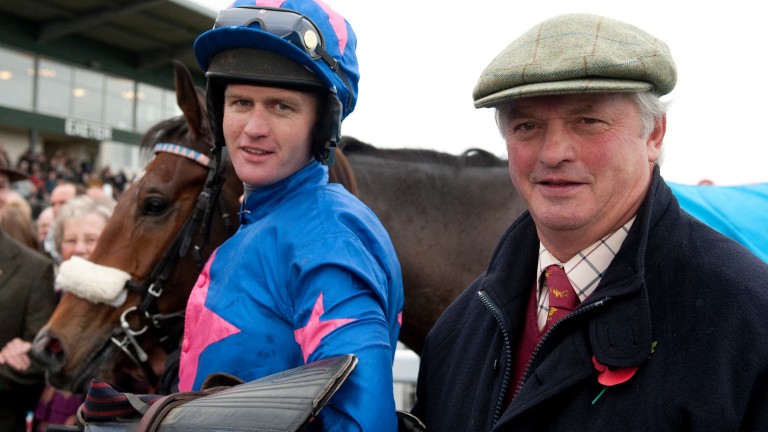 Colin (right) and Joe Tizzard with Cue Card: team tactics wrong at Wetherby but confident of getting it right on Saturday
Edward Whitaker
1 of 1
By Bruce Jackson 3:55PM, NOV 18 2016

Colin Tizzard is full of confidence that his stable star Cue Card can end the unbeaten record over fences of the 2015 Cheltenham Gold Cup winner Coneygree in the Betfair Chase at Haydock on Saturday.

Reflecting on Coneygree’s front-running demolition of his rivals in five majestic wins over the last two seasons, a bullish Tizzard said: “Coneygree is a very good horse. If he makes the running that will be brilliant – he can give us a lead to the last.”

That confidence is built on what the Dorset trainer has seen since Cue Card was beaten in his bid to win the Charlie Hall Chase at Wetherby for the second year running. The ten-year-old finished third to Irish Cavalier, who is set to reoppose on 4lb worse terms in the grade-higher Betfair Chase on Saturday.

Tizzard said on Wednesday: “We jumped Cue Card this morning and he jumped beautifully. We thought we had him fit for Wetherby first time but he is definitely fitter now. The race has brought him on.

“The Betfair Chase is his race. Cue Card has been there and done it so I’m not surprised he is a short-priced favourite.

“He will take all the beating. He is in beautiful form and we are having lots of winners. I am pretty confident going there but it is a horserace after all.”

Bookmakers are not so sure about the horse who will emerge as the contender for the £1m bonus by winning the first of the three legs that make up the Jockey Club’s Triple Crown, which is completed by the 32red King George at Christmas and the Timico Gold Cup at Cheltenham next March.

Cue Card maintains a narrow advantage at the top of the market as 7-4 favourite with the sponsors while Coneygree is a best-priced 9-4.

It is something of a relief to the Tizzards to have Coneygree as a hare after they admitted in hindsight they gave Paddy Brennan the wrong instructions to grab the bull by the horns in the Charlie Hall.

Tizzard said: “We will let Paddy ride his race where he is and not make it happen as we did at Wetherby.

“We had been clear about being positive and we might have overdone it. In hindsight if we had taken a tow off the home bend like the others, instead of kicking on, we would have been closer to winning.”

Brennan shares the belief Cue Card can get back to being the best staying chaser in the land.

He said: “It would be lovely to see him come back on Saturday and prove to everyone he’s still there, and I think he is.

"I think the ground has come in his favour and it’s exciting times. I’d like to think I’ll be riding with a bit of confidence. I’ll ride him like the best horse in the race and we’re really looking forward to it. We know he loves Haydock and I’ll ride him with as much confidence as I can.”

Silviniaco Conti, the 2014 Betfair Chase winner, is a definite runner having been "ticking over" since his seasonal return last month at Down Royal.

Trainer Paul Nicholls added: "He only ran recently at Down Royal and had a hard race as well as all the travelling. The only time Kauto Star was disappointing was when he had done the same thing."

Soft with heavy places is the forecast for the ground at Haydock on Saturday with rain forecast every day and "a couple of significant showers" on Wednesday morning.

Clerk of the course Kirkland Tellwright said on Wednesday afternoon: "Including the showers today we are forecast another 20mm of rain after the thick end of 50mm last week but it is fresh ground.

"It is soft, good to soft in places today but I expect the majority will be soft on Saturday with possibly some heavy places."

FIRST PUBLISHED 4:26PM, NOV 16 2016
Coneygree is a very good horse. If he makes the running that will be brilliant - he can give us a lead to the last