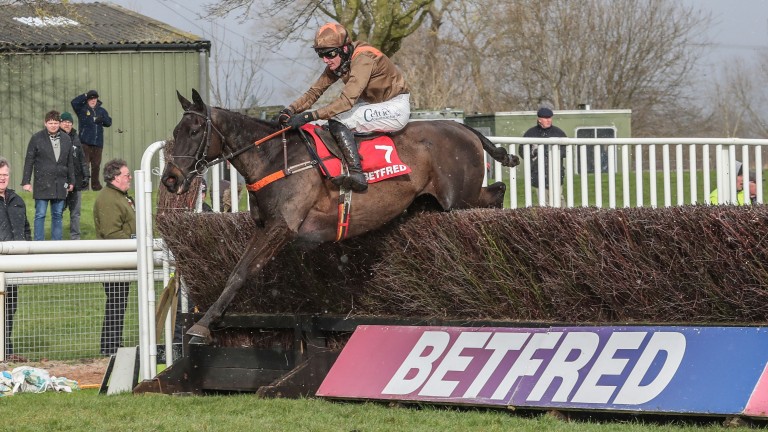 Regal Flow, a winner at Taunton on Monday, showed the freshest of legs to romp home in Saturday's £125,000 Betfred Midlands Grand National, propelling trainer Bob Buckler back into the spotlight and giving jockey Sean Houlihan his biggest triumph.

The 16-1 winner jumped into the lead two out and came clear of Milansbar in stamina-sapping conditions.

Ballymalin was third with Silsol and Alfie Spinner fourth and fifth.

Owned and bred by Heather Dunn, Regal Flow was a three-length winner of a 3m4½f handicap chase at Taunton just five days ago, but was able to power away from the field and record a ten-length verdict in the 4m2f marathon – the feature race of Uttoxeter's most important day.

Houlihan, who claimed 5lb from the 11-year-old's back, paid tribute to Buckler, an Irish Grand National winner with Niche Market in 2009.

He said: "He wasn't too tired after Taunton – it was just like a piece of work! Four miles today felt like nothing to him. Bob's done a brilliant job with this horse. It's all down to him; he's kept him fresh, sweet.

"I rang him up on Tuesday night and, after looking through the entries, said, 'We have to run'. He said exactly the same. This horse is a genuine little thing and it's great for the owner Mrs Dunn and her husband Chris. I'm delighted for them and would like to say a big thank you to my jockey coach Rodi Greene, who's been very good to me this season. It's brilliant."

Buckler was relieved he had decided to run as well.

"I have to admit I was sweating a bit in the lorry on the way up here as to whether I'd made the right choice in turning Regal Flow out again quickly as he had won over three and a half miles at Taunton on Monday," added the trainer, who is based in Somerset, not far from Taunton.

"But he had eaten up on Monday night and was bouncing by Wednesday as he did not have a particularly hard race at Taunton, so it turned out to be one of the better decisions I have made over the years to let him take his chance.

"Judging by the way he has skipped around in the mud and snow he could go around again and if he comes out of this race as well as he normally does, there is no reason why he cannot run again this season."

FIRST PUBLISHED 4:09PM, MAR 17 2018
He wasn't too tired after Taunton - it was just like a piece of work! Four miles today felt like nothing to him. Bob's done a brilliant job with him