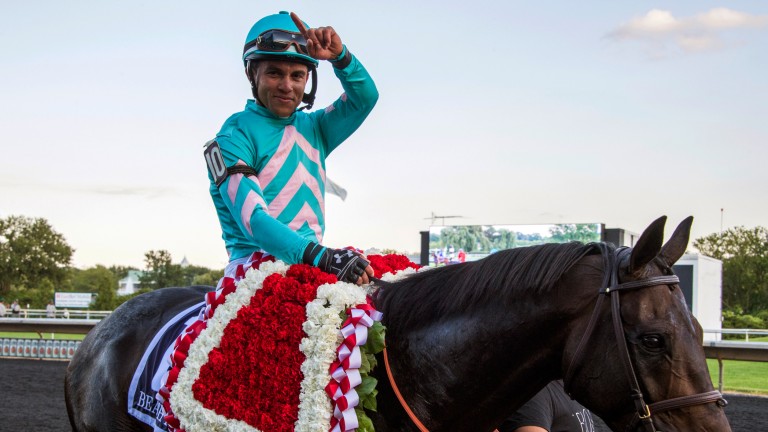 Beach Patrol and Joel Rosario held off a late challenge from Marco Botti's Fanciful Angel to win the Arlington Million XXXV Stakes, a year after landing his maiden Grade 1 success at this meeting in the Secretariat Stakes.

The son of Lemon Drop Kid was winless in the interim, but displayed plenty of heart to rally past Deauville and Ryan Moore then hold off the late thrust of Botti's outsider Fanciful Angel.

Rosario had the four-year-old posted second behind leader Oak Brook and made his move at the top of the stretch. But it looked like being another Moore masterclass as Deauville took up the running having saved ground on the inside.

But having got in front by half a length, Deauville did not pull clear and Rosario gathered up Beach Patrol for another challenge with the pair holding on by half a length.

"They told me I had to get him out of the gate, get into a good position and let him find himself," Rosario said. "It took a little bit of time, but he really found his way after."

Co-owner Sol Kumin of Sheep Pond Partners, quoted on the Blood Horse, added: "He loves it here [and] Joel gave us a great ride. Obviously Chad [trainer, Brown] and his team had the horse ready and we’re super happy.

"It's funny. I’ve seen the trophy and Chad always talked about [how] this is the best trophy in horseracing. It's always been on the bucket list and I’m super fortunate to be here with my kids and dad. It doesn't get much better than this."

Fanciful Angel had finished sixth in a Listed race at Sandown last time, but turned in easily the best performance of his career when coming with a strong run to take second.

Jockey Dan Muscutt said: "We had a good spot on the rail and he cruised around. I got space at the right time, they were just one better at the end. I’m delighted."

Deauville was third in the race last year as well and Moore said: "I think he ran a very good race. He had his chance, maybe the trip stretched him."

Beach Patrol's victory secured a big-race double for Chad Brown as earlier on the card Dacita won the Grade 1 Beverly D with a sustained surge in the straight.

Ridden by Irad Ortiz, the mare was waited with before being produced down the stretch with stablemate Grand Jete following her through to dead-heat for second with favourite Dona Bruja.

Like Beach Patrol, Dacita is co-owned by Sheep Pond Partners and Sol Kumin, representing the owners, said: "We were waiting for her to be right and praying for some firm ground and we got it today and got super lucky.

"This filly is something special, the way she finished we knew she had it in her. Thanks to Mr. Brown. We’ll have to regroup and talk to Chad with the Breeder’s Cup being the goal."

Rain Goddess, Aidan O'Brien's runner for the race, was prominent but then faded badly under Ryan Moore, finishing eighth of ten.