Brother Bear out to give Harrington another big Ascot hope

A race first run 50 years ago has a different look to it on Saturday, with the distance increased from five to six furlongs.

Won a year ago by Caravaggio, who went on to land the Coventry Stakes and the Group 1 Phoenix Stakes, the contest gives Brother Bear, who created a big impression when scoring on his debut at Leopardstown, the opportunity to boost his Royal Ascot claims.

His trainer Jessica Harrington already has a leading Ascot contender in two-year-old filly Alpha Centauri, and she holds Brother Bear in high regard.

She said: "We were delighted with Brother Bear's performance at Leopardstown and he's done very well since. We're very happy with him. We'll see how things go and then decide on his Ascot target."

Like so many other races, the race has been dominated by Aidan O'Brien, who is three-handed in his bid for an 11th victory.

Sioux Nation, the mount of Ryan Moore, finished second to Brother Bear at Leopardstown before going on to win a maiden at Cork and he is joined in the seven-runner line-up by maidens US Navy Flag and Mount Wellington.

O'Brien said: "Sioux Nation is a big colt and it took him a couple of races to get things together. He won nicely at Cork and has done well since.

"US Navy Flag ran a nice race last time. He was still a bit green but we think he's learned from the experience. We also think Mount Wellington has come forward since running third on his debut at Dundalk."

Godolphin run the Charlie Appleby-trained pair Gold Town, who is fitted with cheekpieces for the first time, and Aqabah.

Appleby said: "Aqabah made a pleasing debut at Ascot and William Buick said it rode like a nice race. We're very much looking forward to stepping him up to six furlongs. 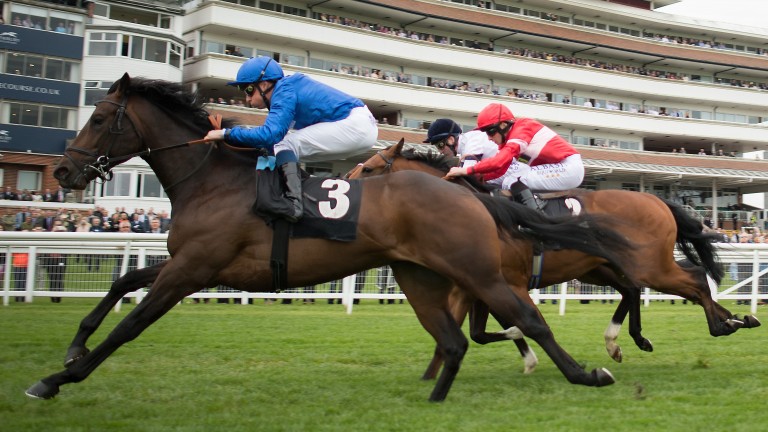 "Gold Town won nicely first time but then disappointed at Newcastle. We've since worked him in cheekpieces and he went well in them. We're expecting a better showing this time."

Ger Lyons, who won the event with Cappella Sansevero in 2014, is represented by Would Be King, who finished third over the course and trip on his debut two weeks ago.

Ascot implications – take it or leave it?

Coventry Stakes: Brother Bear is a 12-1 shot. If you fancy him to win the Marble Hill, back him on Saturday morning

Windsor Castle Stakes: Aqabah is also 12-1 for this, but note this race is over five furlongs – it might be best to hang fire

FIRST PUBLISHED 6:00PM, MAY 26 2017
We were delighted with Brother Bear's performance at Leopardstown and he's done very well since. We're very happy with him.