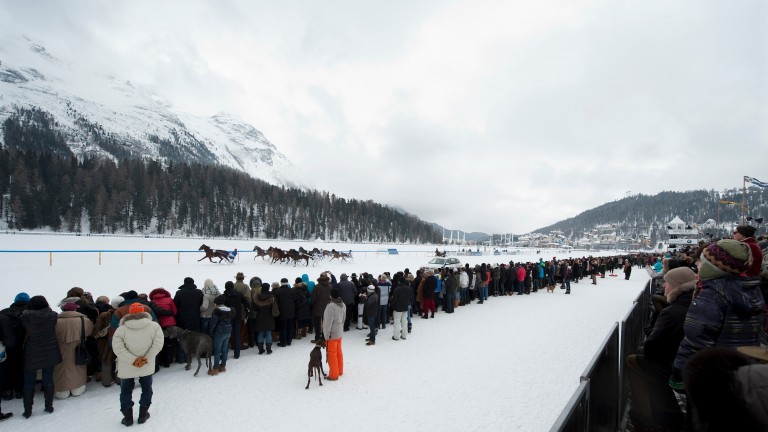 St Mortiz: one of the world's most iconic racing venues
Edward Whitaker (racingpost.com/photos)
1 of 1
By James Stevens 1:52PM, FEB 17 2019

A team of Brits heads out to Switzerland on Sunday with hopes of landing one of the most famous races on the international calendar, the Longines 80th Grosser Preis von St Moritz.

Run on snow on top of a frozen lake, the 1m2f race is the pinnacle of the three-week meeting and New Agenda, who won a trial race on the lake a fortnight ago, is favourite for the Group 2 prize.

The seven-year-old is owned by the New Agenda syndicate, a group put together by trainer Paul Webber.

Excitement among members is high as one of them, Rory McGrath, said: "I've been in racing for quite some time but this is a completely new experience. It's horseracing on a frozen lake, with 10,000 people and all the paraphernalia on top of it. The horses go a good gallop on there too, it's quite a sight.

"It's an iconic race and the excitement of having a runner is hysterical. We have had troubles getting hotel rooms and the Swiss Franc makes everything an eye-watering price.

"It's all very typically Swiss, with fur hats and coats, and it's a great event. The syndicate are going out to see him run for the second time and it's an extraordinary feeling."

Equine enthusiasts gathered upon the frozen lake of the Graubünden to witness a social and sporting favourite in the winter calendar.

Webber is pleased with how the preparation for Sunday has gone, and said on Saturday: "I've got a very excited syndicate; there are nine of them in it and six will be up the mountain.

"All seems well. Lee Quirk, who's been looking after the horse, seems very happy with him. Dennis [Schiergen, jockey] had a canter on the track with him this morning and it's not as deep as it was two weeks ago, which I think is a good thing for New Agenda."

While it is new experience for those concerned with New Agenda, John Best is an old hand at having runners at St Moritz.

Berrahri was runner-up in this race last year and gained a fourth win at the track seven days ago when beating Fiesta by half a length. Before that he finished third behind New Agenda, beaten a distance.

Best admits the eight-year-old has work to do to reverse the form. "It's going to be completely different conditions and my view is New Agenda will improve dramatically for the better ground and I think he'll be very hard to beat.

"Our lad will handle anything but he had a very hard race last week."

FIRST PUBLISHED 6:00PM, FEB 16 2019
I've been in racing for quite some time but this is a completely new experience