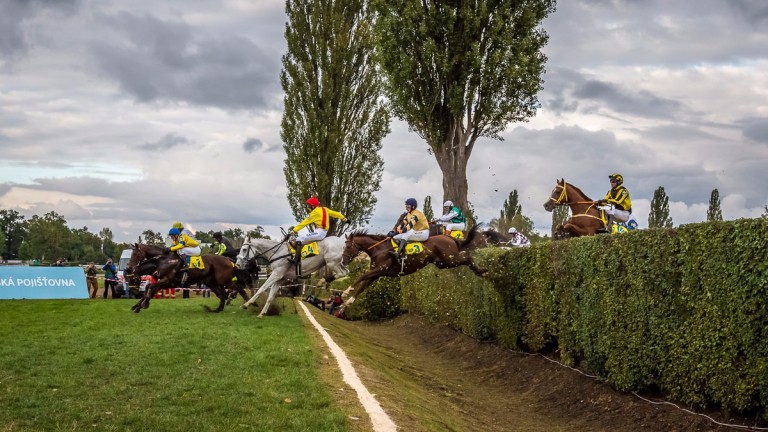 Tzigane Du Berlais stayed on best of all in the hands of Jan Faltejsek to land the historic Velka Pardubicka over the marathon 4m2½f trip at Pardubice in the Czech Republic.

British rider Thomas Garner looked like claiming a famous triumph in the cross-country chase when taking the lead on Stretton in the home straight but ultimately finished third. Hegnus provided the sternest challenge to the winner in second.

Leighton Aspell, Andrew Glassonbury and James Best in addition to Garner formed the quartet of British-based pilots who made the trip across Europe.

Aspell's mount Vajgaros was a faller on the first circuit, but Glassonbury and Best completed the course in ninth and 11th respectively.

However, Tzigane Du Berlais's victory for trainer Pavel Tuma ensured the long spell in the wilderness for British jockeys continued, with Charlie Mann the last to taste success in 1995 on It's A Snip.

The race was won by a Czech-trained horse for a 13th successive year, and the winner is a half-brother to Gitane Du Berlais, who won the Scilly Isles for Willie Mullins in 2015.

Winning rider Faltejsek will be a familiar name to followers of British racing for his association with Knockara Beau, who he rode in the majority of his races, memorably beating Big Buck's in the 2014 Cleeve Hurdle.

FIRST PUBLISHED 4:32PM, OCT 14 2018
Winning rider Jan Faltejsek will be a familiar name to followers of British racing for his association with Knockara Beau