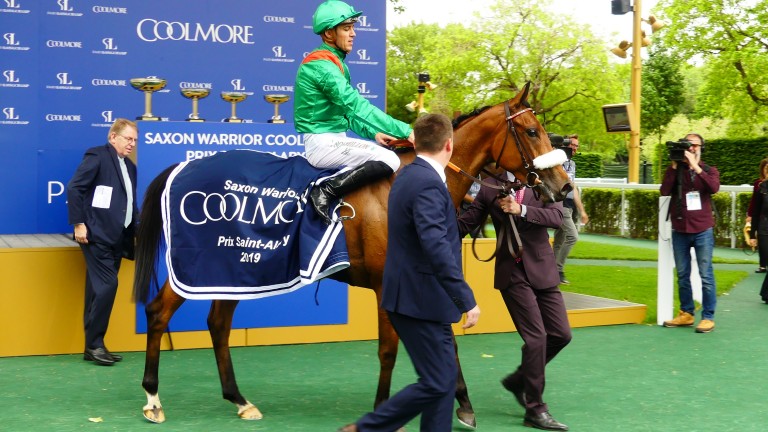 Christophe Soumillon in the winner's circle after landing the Prix Saint-Alary on Siyarafina
Racing Post / Scott Burton
1 of 1
By Scott Burton 8:02PM, MAY 26 2019

Siyarafina confirmed the positive impression created in two easy wins over a mile when taking the step up in trip and class in her stride to register a straightforward length defeat of Olendon in the Group 1 Prix Saint-Alary.

Her position at the head of the market for the Prix de Diane Longines lasted less than an hour, however, following news that dual Guineas heroine Hermosa is on course for what promises to be a mouthwatering showdown at Chantilly on June 16.

Trainer Alain de Royer-Dupre was careful not to get carried away with Siyarafina's success and confessed he hoped there would be more to come in the Diane.

"She won but I was perhaps hoping for a little bit more," said Royer-Dupre. "It was the first time she has tried the trip and it is four weeks since she ran, so perhaps she was a little short of condition.

"She showed she stays but if I'm being very critical she was perhaps a tiny bit less fluid in her movement. This race might well bring her on in terms of condition for three weeks' time."

Imperial Charm ran another solid race in third following her fourth place in the French 1,000 Guineas behind Castle Lady.

"I'm delighted with her and she has run the same honest race as always," said Simon Crisford. "She's vulnerable to those late closers but she has run a super race."

Brandt hears the Call of the Gold Cup 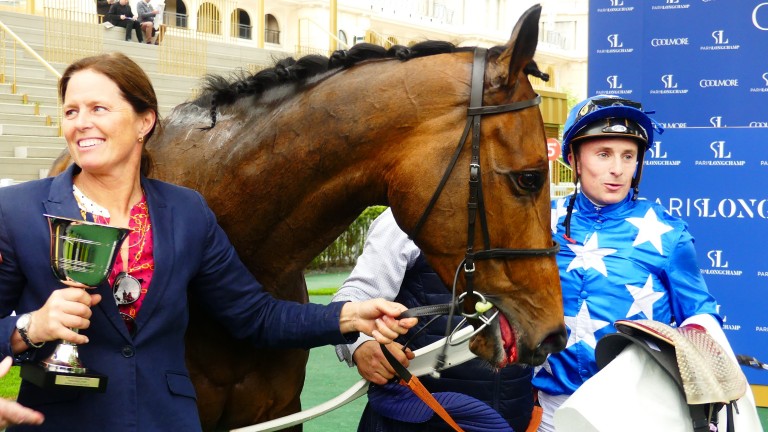 Called To The Bar ran out a four-length winner of the Group 2 Prix Vicomtesse Vigier, a race that has traditionally played the role of stepping stone to the Gold Cup and which for the first time this year features as the final qualifier for the Weatherbys Hamilton Stayers' Million series.

Trainer Pia Brandt is keen to take the logical next step at Royal Ascot and Called To The Bar is now a general 16-1 chance for the Gold Cup.

"He relaxed a lot better than last time and he's more straightforward and a lot more experienced than Bathyrhon, who wasn't beaten far in the Gold Cup four years ago," said Brandt. "He has plenty of speed and if you look at his split times, he always runs under a minute for the last 1,000 metres [five furlongs], which is rare for a stayer."

FIRST PUBLISHED 8:02PM, MAY 26 2019
This race might well bring her on in terms of condition for three weeks' time