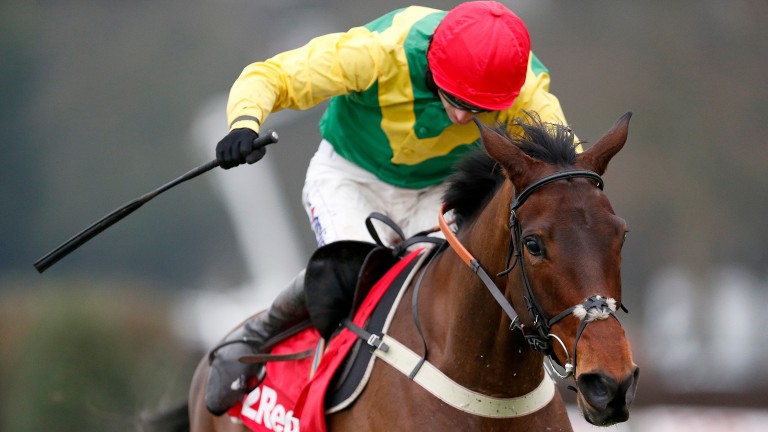 Finian's Oscar: an Irish point-to-point graduate who went on to land the Tolworth Hurdle
Alan Crowhurst
1 of 1
By Graham Dench 1:57PM, JAN 8 2017

Birthday presents for jumps trainers do not come much better than Grade 1 winners, and Colin Tizzard, celebrating his 61st, was pinching himself yet again after Finian's Oscar delivered a fourth top-tier win of the season and a third since Christmas in the 32Red Tolworth Hurdle at Sandown on Saturday.

It was not a birthday surprise, however, as Tizzard has been saying since the £250,000 point-to-point winner arrived in the yard that he will be among the best he has, and it was not as though the £25,627 first prize made any significant inroads into the championship lead held by Paul Nicholls, who saddled five-length runner-up Capitaine.

Tizzard was pinching himself because, hot on the heels of Thistlecrack and Cue Card's King George and Royal Vacation's Feltham, not to mention Native River's Welsh National, here he was with another very live Cheltenham prospect on his hands – a horse whose existence he had wind of only a few months ago and one he could not have contemplated buying before owners Ann and Alan Potts came knocking on the door in September.

He said: "He's a beautiful young horse. We didn't know he was going to do that – he's only won a point-to-point and a novice hurdle at Hereford – but the way he did it at Hereford we thought there was no point in wasting him in another little race when he could have a go at this.

"It's worked out beautifully. It was a brilliant performance and he obviously handles this sort of ground as well. He looked in control most of the way and then soon went five lengths clear. He stuttered a bit going into the last, but when Tom [O'Brien] got busy with him he went on again. He's a good horse."

He added: "There were a lot of people in Ireland putting him up to us, and there were good people after him, but we couldn't have contemplated going for a horse like this 12 months ago.

"It makes this game a lot easier when you can buy these lovely young horses. Always before we've been buying stores and waiting two or three years to find out if they are 0 to 90 horses or one of the half dozen or so who have got really good." 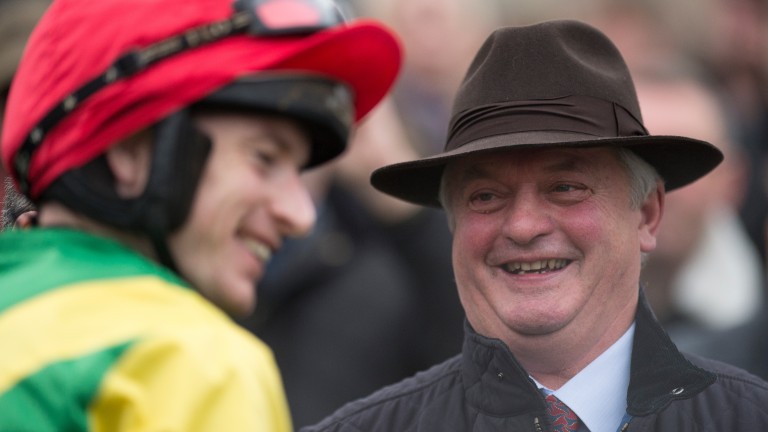 Tom O'Brien and Colin Tizzard are all smiles after the victory of Finian's Oscar
Edward Whitaker
Finian's Oscar is favourite now for the Neptune Investment Management Novices' Hurdle at as short as 4-1 with Coral (from 12), but Tizzard is not ruling out the shorter Sky Bet Supreme.

He will not rush into a decision, and said: "Cheltenham is where we want to be and he probably will run again before then, but I don't know if he's a two-miler or a two-and-a-half miler. Someone will tell me!"

One of the great things about Tizzard's success this season is that several different jockeys have shared in it. This time it was O'Brien, who stood in at Hereford when Aidan Coleman was unavailable.

O'Brien was partnering his second Grade 1 winner after a gap of more than nine years since Souffleur won the Challow and has his fingers firmly crossed that he will keep the ride.

He said: "He's getting towards one of the best I've ever ridden. That was brilliant and I just hope I keep the partnership. Nothing is set in stone though, and we've got to get there. He could be anything, and he'll be a lovely chaser."