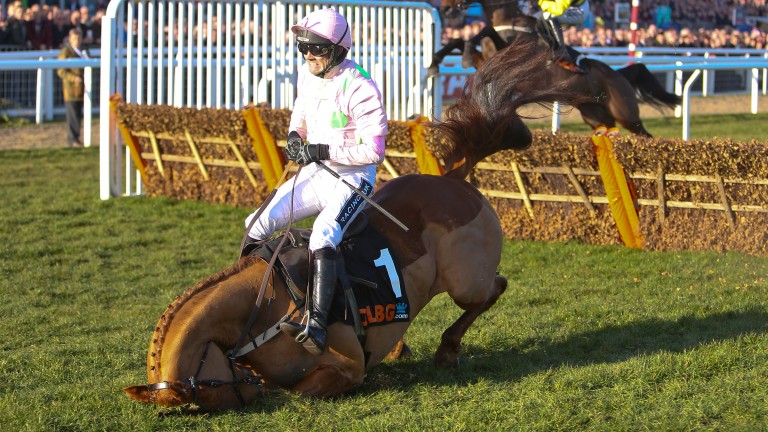 The glorious career of one of the finest mares to race over jumps in recent times is over after Willie Mullins revealed his exquisite 2016 Champion Hurdle heroine Annie Power will not return to the track for a swansong.

Already in foal to Camelot, Annie Power has not raced since following last year's devastating Cheltenham Festival defeat of My Tent Or Yours with an even more resounding 18-length victory over the same horse in the Aintree Hurdle.

Attempts to get her back on a racecourse last season were plagued by niggling injuries and setbacks. While Mullins had mooted the possibility of the nine-year-old forming part of one of his French escapades or even running on the Flat, he and the great mare's owners Rich and Susannah Ricci have instead decided to call time on her service.

"I discussed things with her owners over the weekend and we decided we were happy to let her retire and that we would not be sending her to France," Mullins told the Racing Post.

"She's in foal to Camelot and doesn't owe anyone anything. She retires with an outstanding record, winning all but two of her 17 races. She was a very special racemare and gave us many memorable days. Her Champion Hurdle win last year was definitely one of the highlights of my career as a trainer.

"To see her landing running over the last in the Champion Hurdle, after what had happened in the Mares' Hurdle the year before, was fantastic and seeing her gallop up the hill for victory was very, very special.

"Her performance in winning the Aintree Hurdle by 18 lengths was an amazing effort. Little did we think at that time that it would turn out to be her last race."

Sparkling career marked by brilliance and touch of drama:
Click here for Annie Power in Queens of the Turf

Although not unexpected given the legacy that Annie Power had fashioned for herself and her considerable value as a broodmare, the decision to retire her brings down the curtain on a stellar career.

Ridden by Patrick Mullins when successful in her first two bumpers at Galway and Wexford for her owner-breeder Eamon Cleary when trained by Jim Bolger in 2012, the imposing daughter of Shirocco switched to the champion trainer's care when bought by Ricci before that year's Listowel festival.

She again dotted up there in a two-horse race to claim her third bumper. In 14 subsequent starts over hurdles, she was beaten just once when completing the course after being carried out on her shield in an epic tussle with More Of That in the 2014 Stayers' Hurdle at the Cheltenham Festival.

Having subsequently got back to winning ways in the Mares' Champion Hurdle at the Punchestown festival, Annie Power was not seen on the track again until the following year's Cheltenham Festival.

In trying to emulate the mighty Quevega by landing the OLBG Mares' Hurdle on her seasonal reappearance, she crashed out at the final flight under Ruby Walsh with the race at her mercy.

It was one of the most dramatic festival incidents in recent years, coming as it did after the Mullins-Walsh combo had already plundered the first three Grade 1s of the day with Douvan, Un De Sceaux and Faugheen.

The picture of Annie Power slithering to the ground under a grimacing Walsh is now an iconic sports image, not least because the 1-2 favourite's exit is reckoned to have saved the bookmaking industry around £50 million in accumulator liabilities. Mullins won the race regardless with second-string Glens Melody.

A year later Annie Power got the chance to finally fulfil her destiny and end her festival hoodoo when she was drafted in to spearhead Mullins' Champion Hurdle team after Faugheen was ruled out through injury. She did not disappoint, stamping her authority on the race with a thoroughly decisive performance under Walsh.

The first mare to win the championship event since Flakey Dove in 1994, Annie Power was undoubtedly the best National Hunt mare since Dawn Run, who completed the seminal Champion Hurdle-Gold Cup double for Mullins' father Paddy in 1984 and 1986.

Thankfully, she now seems assured a happier fate than Dawn Run, who was killed in a fall in the French Champion Hurdle following her famous last-gasp Gold Cup triumph.

All being well, Annie Power's legacy will live on, not just through the memories of her superlative endeavours on the racecourse, but through her offspring in the years to come.

FIRST PUBLISHED 11:29AM, MAY 16 2017
I discussed things with her owners over the weekend and we decided we were happy to let her retire and that we would not be sending her to France