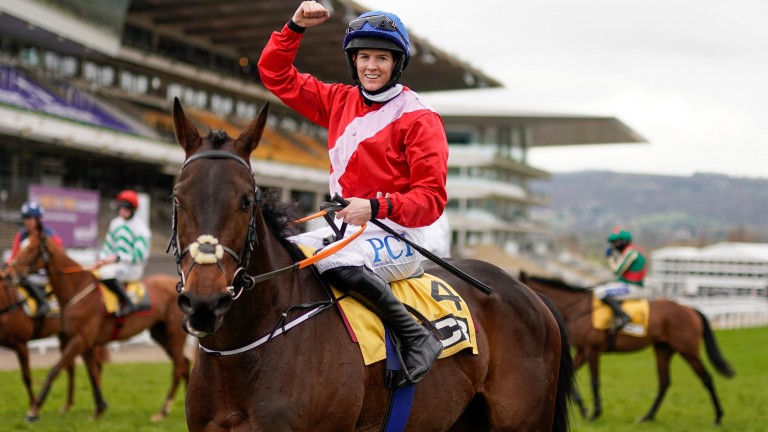 Rachael Blackmore, whose ability in the saddle and charisma out of it has stolen the show at the Cheltenham Festival, ended the week as top jockey, her six winners at the meeting being more than anyone has ridden at one apart from the legendary Ruby Walsh.

Blackmore, already the name on everyone's lips after five winners including Tuesday's Unibet Champion Hurdle on star mare Honeysuckle, picked up on Friday exactly where she left off by landing the JCB Triumph Hurdle on Quilixios.

That provided Blackmore, second on A Plus Tard in the WellChild Cheltenham Gold Cup on Friday's card, with her sixth winner, which is one short of the hauls Walsh – arguably the greatest jump jockey of all time – recorded at the 2009 and 2016 festivals. 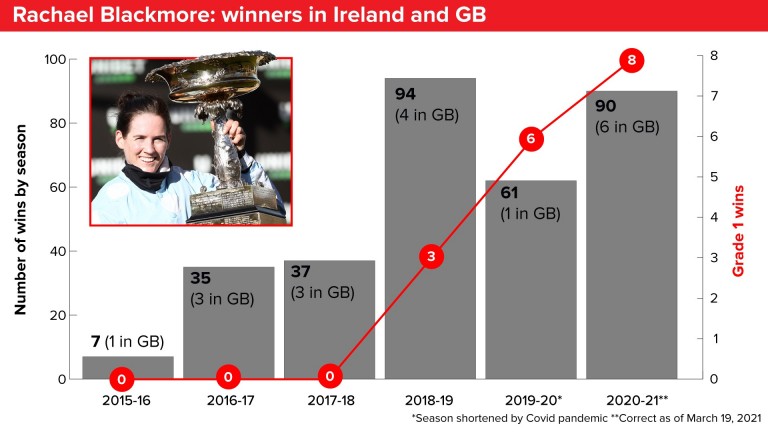 The acclaimed 31-year-old had ridden three victories at the festival before this week, but quickly added to that thanks to Honeysuckle, and partnered Wednesday winners Bob Olinger (Ballymore) and Sir Gerhard (Champion Bumper).

Thursday was also productive for Blackmore by way of Allaho's storming triumph in the Ryanair and Telmesomethinggirl, who was too good for her rivals in the Parnell Properties Mares' Novices' Hurdle.

She finished clear of Jack Kennedy, who had four winners, while Paul Townend, top rider last year with five, had three.

"It's phenomenal," she beamed, going on to thank Henry de Bromhead, who supplied five of her six winners.

"I can't even comprehend being leading jockey at Cheltenham – that's crazy stuff. It's been brilliant. Henry de Bromhead is an incredible trainer. I'm just part of that team and getting on those horses.

"Honeysuckle is definitely the standout moment. She is extremely special and she was phenomenal in the Champion Hurdle." 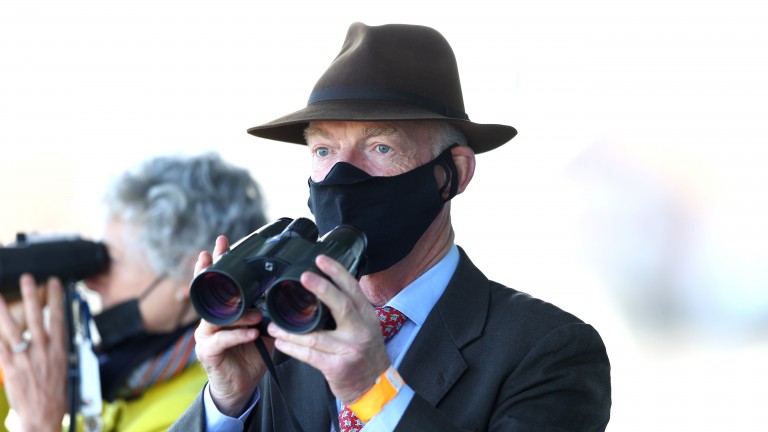 Blackmore, tussling with Townend in the Irish jump jockeys' title race, added: "I was hoping I would get one and every jockey thinks that, but when that happens it's some weight off your shoulders and everything is a bonus after that.

"I got a great tune of Allaho and when a horse jumps from fence to fence like that it's a great thrill for a jockey."

Allaho was one of six winners for Willie Mullins, who topped the trainer standings on the same number as De Bromhead, who lost out on the countback of placed horses.

Their efforts led an irresistible Irish charge that resulted in a record 23 winners for the raiding party, eclipsing the previous best of 19 in 2017. 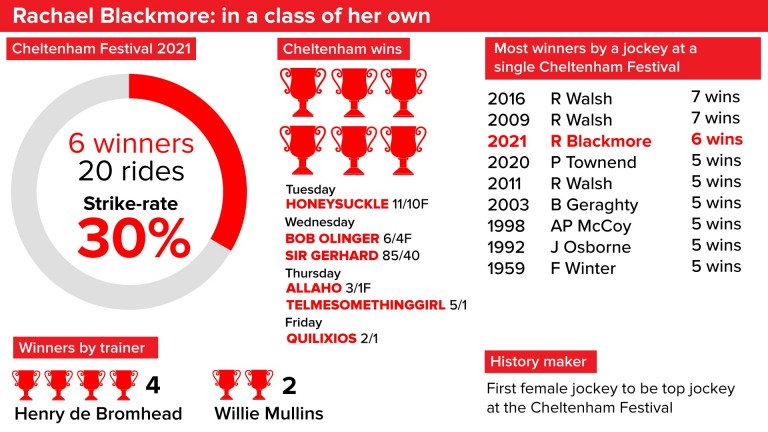 It was the eighth time Mullins has scooped that honour and, despite extending his record of winners at the meeting to a magnificent 78, he found time to ponder what might have been.

"We've had six winners but Concertista getting beaten and Chacun Pour Soi getting beaten, Al Boum ran a cracker but it wasn't to be, so a few of our hotpots got beat and that puts a little damper on it," he said.

"But then other horses came up and we got the winners over the line."

More from the 2021 Cheltenham Festival:

FIRST PUBLISHED 5:15PM, MAR 19 2021
I got a great tune of Allaho and when a horse jumps from fence to fence like that it's a great thrill for a jockey

Rachael Blackmore's timing may have been key to A Plus Tard's Savills defeat It will be the roar of all roars - and now we have a Supreme worthy of it Meet the miracle workers with just four horses but eyes on the biggest prizes Are the opposition running scared of Bob Olinger? Four Turners talking points Will Gordon Elliott dominate again? Four National Hunt Chase takeaways Champ given Cleeve Hurdle prep as Stayers' emerges as 'probable' festival target