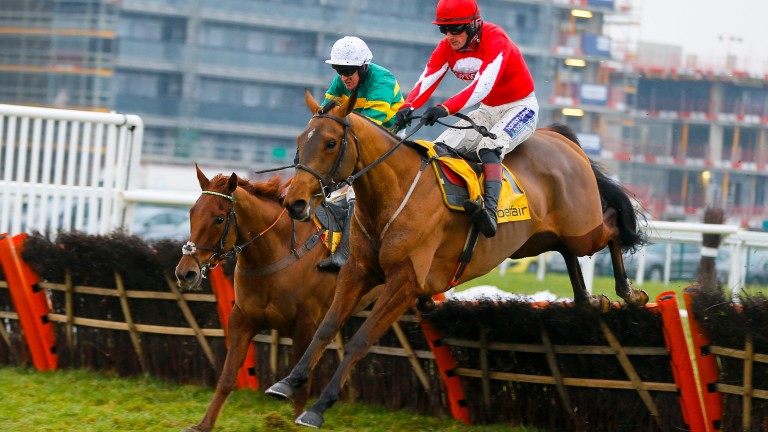 Ballyandy (right) and Sam Twiston-Davies clear the last ahead of Movewiththetimes
Mark Cranham
1 of 1
By Bruce Jackson 6:00PM, FEB 11 2017

The cream rose to the top in the Betfair Hurdle and Nigel Twiston-Davies looked like the feline lapping it up as his faith in Ballyandy was repaid with another big-race win.

Last year's Champion Bumper winner had left him deflated after being beaten in his first three hurdle races, albeit twice by 2015 Champion Bumper scorer Moon Racer, but he came good here to score by three-quarters of a length from Movewiththetimes.

The Naunton trainer said: "We couldn't understand how he was beaten in his first three races as we thought he was a superstar from his bumper days. It takes a special sort of trainer to get him beat but I managed it."

Despite the in-house weeping and wailing, the world and his wife seemed to realise the handicapper had given Ballyandy and fellow novice Movewiththetimes great chances here on their handicap debuts.

The betting public's confidence proved to be spot on as the pair, who had dominated the head of the ante-post market, had the 16-runner feature handicap between them halfway up the home straight.

Ballyandy ripped favouritism from the JP McManus/Paul Nicholls representative, which is no mean feat when the owner has a leading contender, and he then tore the £88,272.50 prize away from his market rival after the last.

The winner's cause was by stablemate Ballyhill and conditional Tom Humphries, who made sure there was no place to hide in setting a ragged pace, and Ballyandy arrived cantering on the stands side with Movewiththetimes.

They effortlessly went clear before the last and then Sam Twiston-Davies got an immediate response from the favourite up the run-in to shake off the gallant runner-up.

Clyne was third, six lengths further back, with Song Light beaten another two lengths in fourth.

Cheltenham betting reaction was swift despite Ballyandy having both the Supreme and Neptune entries.

His trainer added: "He'll get an entry in the Coral Cup as well."

Bookmakers generally halved his odds to 8-1 for both novice races but the winning rider's immediate reaction was that the longer Neptune would play to Ballyandy's strengths.

The trainer, winning his second Betfair Hurdle after Splash Of Ginge in 2014, added: "After that I think the world is his oyster as he can only go on from this race and I'd like to think he'll be a better horse next year as well.

"But what a race and we'll savour winning this one before thinking about later in the season."

FIRST PUBLISHED 3:57PM, FEB 11 2017
The world is his oyster as he can only go on from this race and I'd like to think he'll be a better horse next year as well