News DEATH OF A GREAT 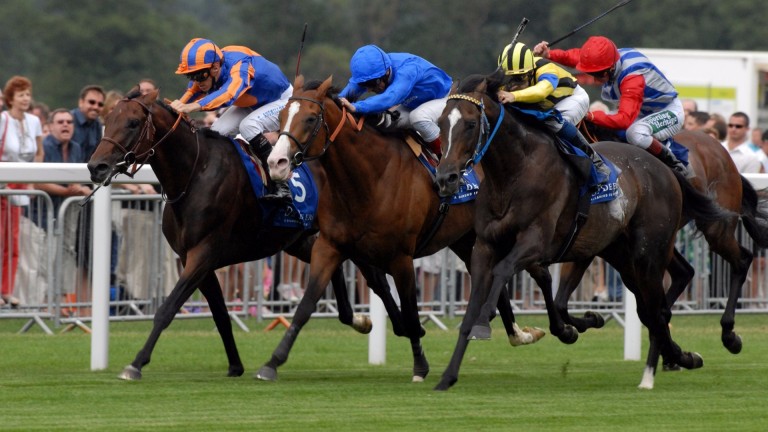 Hurricane Run, the brilliant winner of the 2005 Prix de l'Arc de Triomphe, as died at stud at the age of 14.

The son of Montjeu had been standing at Germany's Ammerland Stud, where he was also bred and from where his death was announced yesterday afternoon.

A statement read: "It is with great sadness that we would like to say we had to give up our great stallion Hurricane Run due to serious complications during a planned routine operation this morning."

"We would also like to thank all the breeders who supported him."

Trained by Andre Fabre and owned by Michael Tabor, Hurricane Run was a winner of eight of his 14 career starts and notched his first Group 1 success when winning the Irish Derby at the Curragh under Kieren Fallon in 2005.

Outstanding at a mile and a half, the colt suffered defeat only once that summer, in the newly shortened Prix du Jockey Club at Chantilly when beaten by Shamardal.

He capped off a fine campaign with victory in the Arc, beating Westerner and a field that also included the Derby winner Motivator. The performance saw him top the year's global rankings and helped him scoop the Cartier European Horse of the Year prize.

He returned to the Curragh for his first start of 2006, scaring away all but two rivals as he added the Tattersalls Gold Cup to his CV before emulating his father in completing the Arc-King George VI and Queen Elizabeth Stakes double later that year.

That Ascot success, which came with Christophe Soumillon in the saddle, was to be his last. Third behind Rail Link back at Longchamp in October 2006, he occupied the same position in the Champion Stakes at Newmarket under Mick Kinnane before failing to land a blow in his final start in the Breeders' Cup Turf at Churchill.

Hurricane Run compiled a solid if unspectacular progeny record from the first six years of his stallion career at Coolmore, with this year's Joe Hirsch Turf Classic winner Ectot the best of his 29 stakes winners.

Better may be to come from his crops since he was transferred to his breeder Dietrich von Boetticher's Gestut Ammerland, with his oldest German-conceived runners set to turn three on January 1.

It may turn out that Hurricane Run's lasting legacy on the breed will be rather more oblique.

When he narrowly failed to reel in Shamardal in the Prix du Jockey Club in the first year its distance was reduced to 1m2½f – a move that surely cost him victory – Boetticher resolved to send one of his best mares to the winner in his first year at stud.

The resultant Shamardal colt out of Lady Vettori was Lope De Vega, who avenged Hurricane Run's defeat by winning the Prix du Jockey Club in 2010 and now ranks as one of Europe's most exciting young sires.

FIRST PUBLISHED 5:01PM, DEC 14 2016
It's with great sadness that we'd like to say that we had to give up our great stallion Hurricane Run due to serious complications during a planned routine operation this morning